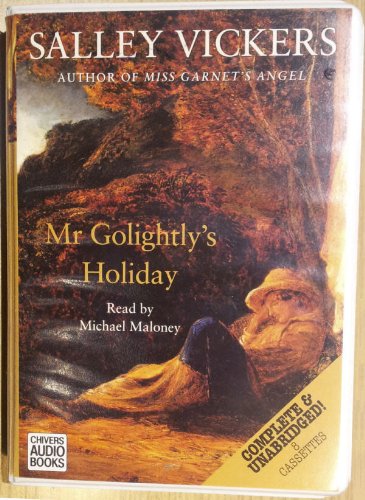 The new novel from the best-selling author of ‘Miss Garnet's Angel’ and ‘Instances of the Number 3’.

Holiday: a period in which a break is taken from work or studies for rest, travel, or recreation. [literally: holy day]

Many years ago Mr Golightly wrote a work of dramatic fiction that grew to be an international bestseller. But his reputation is on the decline and he finds himself out of touch with the modern world.

He decides to take a holiday and comes to the ancient village of Great Calne, hoping to use the opportunity to bring his great work up to date. But he soon finds that events take over his plans and that the themes he has written on are being strangely replicated in the lives of the villagers he is staying among.

He meets Ellen Thomas, a reclusive artist, young Johnny Spence, an absconding schoolboy, and the tough-minded Paula who works at the local pub. As he comes to know his neighbours better, Mr Golightly begins to examine his attitude to love, and to ponder the terrible catastrophe of his son's death. And as the drama unfolds we begin to learn the true and extraordinary identity of Mr Golightly and how the nature of the secret sorrow that haunts him links him to his new friends.

Mysterious, light of touch, witty and profound ‘Mr Golightly's Holiday’ confirms Salley Vickers's reputation as one of our most original and engaging novelists.

Fiction readers with a sweet tooth and a high tolerance of Anglican whimsy are offered much beguilement in Sally Vickers' new novel Mr Golightly's Holiday. Set in the Devon village of Great Calne, it records the events observed, and in part precipitated, by Mr Golightly, the author of a work once famous but now tending to be overlooked, who has elected to settle himself in this community for a while. Mr Golightly himself, a rumpled, elderly figure arriving in a half-timbered Traveller van, is a familiar enough version of "the male author"; Great Calne, an apparently idyllic village with a wide range of carefully differentiated characters, but underneath seething with unseen discontents and rivalries, is itself another easily summoned trope--the kind of community now perhaps most commonly encountered in fictional terms in TV shows. This is handy, for Mr Golightly decides that the best way of dragging his great work into the limelight of popularity and relevance is to recast it as a soap opera. In the event, he makes little headway with this project because, of course, the affairs of the village become all-absorbing and gradually draw him in. And so things unfold, as the characters carefully established by Sally Vickers work out their destinies in a mixture of social comedy (some of it very sharp), melodrama, nature mysticism and visionary redemption that delivers far more than the opening paragraphs can suggest. Moreover, the precise identity of Mr Golightly, while not exactly part of the plot, is disclosed gradually and may come as a surprise to some.

It should be said that this is not really a novel, although it does offer many of the satisfactions of a novel. It is a fable with distinctly eschatological overtones, and as such runs the general risks of the genre, most of which are successfully negotiated. --Robin Davidson

‘Salley Vickers is a writer whose subtle intelligence and unobtrusive command of narrative I always enjoy. She sees with a clear eye and writes with a light hand, and she knows how the world works; and these qualities are much rarer than they should be. She's a presence worth cherishing in the ranks of modern novelists.’ Philip Pullman

‘Few novelists would dare tackle the theme of Salley Vickers’s third novel; fewer still would pull it off so triumphantly. I am speechless with admiration.’ John Julius Norwich

Praise for ‘Instances fo the Number 3’:

‘The reader glides through it effortlessly. The plot is simple, yet has an amazing amount of narrative power. Vickers’ second novel confirms that she will have a long and outstanding career.’ Martyn Goff, The Times

PRAISE FOR INSTANCES OF THE NUMBER THREE:
‘Gentleness of perception and sharpness of intellect ... sustains you long after the last page.’ Bel Mooney, The Times

‘Studded with observations and asides that stop you in your tracks.’ Julie Wheelwright, Scotland on Sunday

PRAISE FOR MISS GARNET’S ANGEL:
'Writes like a haunted angel' The Times

'Rich, complex and haunting... she makes the ancient story as riveting as Miss Garnet's own adventures' Sunday Times

'All lovers of Venice should read this book' The Spectator