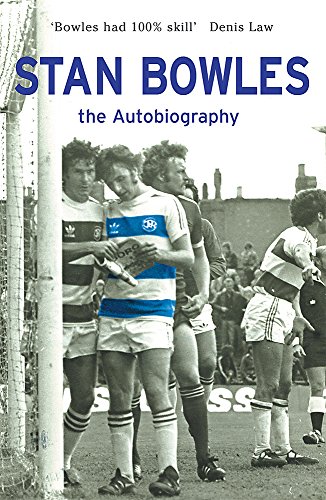 'I think that Frank Worthington summed my life up quite well when he said, "Stan has spent all of his money on gambling, booze and birds." I responded to that: "Well, at least I didn't waste it!"'

Stan Bowles was one of the greatest players of the golden age of English football, the 1970s. But like many of his contemporaries, he was probably as famous for his exploits in the bar or at the race track. Indeed, his chronic addiction to gambling led him to blow upwards of quarter of a million pounds. Packed with irreverent and entertaining anecdotes the book covers the ups and downs of Bowles' career, from his childhood in a prefab in Manchester, his early days at Man City, spent hanging around with the likes of George Best as well as the notorious Quality Street Gang, his heyday at QPR, and the unhappier times at Forest and Leyton Orient.

STAN BOWLES, MY AUTOBIOGRAPHY is an unflinchingly honest account of a sporting legend.

'Bowles emerges from the book as he emerged from his career, a likeable rascal rather than a rogue.' (WHEN SATURDAY COMES)

'Stan the Man is still a legend... A fascinating snapshot of the 1970s and a look at the lifestyle of a football maverick.' (SHOOT)

'Another enigmatic waster whose exploits might have diminished his game but bolstered his autobiography.' (KENSINGTON TIMES)

Book Description Orion 07/04/2005, 2005. Paperback. Condition: Very Good. Shipped within 24 hours from our UK warehouse. Clean, undamaged book with no damage to pages and minimal wear to the cover. Spine still tight, in very good condition. Remember if you are not happy, you are covered by our 100% money back guarantee. Seller Inventory # 6545-9780752865393

Book Description Orion Publishing, 2005. Condition: Good. New Ed. Ships from the UK. Shows some signs of wear, and may have some markings on the inside. Seller Inventory # GRP111471545

Book Description Orion 07/04/2005, 2005. Condition: Very Good. This book is in very good condition and will be shipped within 24 hours of ordering. The cover may have some limited signs of wear but the pages are clean, intact and the spine remains undamaged. This book has clearly been well maintained and looked after thus far. Money back guarantee if you are not satisfied. See all our books here, order more than 1 book and get discounted shipping. . Seller Inventory # 7719-9780752865393

Book Description Paperback. Condition: Fair. A readable copy of the book which may include some defects such as highlighting and notes. Cover and pages may be creased and show discolouration. Seller Inventory # GOR001823849

Book Description Paperback. Condition: Good. The book has been read but remains in clean condition. All pages are intact and the cover is intact. Some minor wear to the spine. Seller Inventory # GOR002058877

Book Description Paperback. Condition: Very Good. The book has been read, but is in excellent condition. Pages are intact and not marred by notes or highlighting. The spine remains undamaged. Seller Inventory # GOR001305777

Book Description Orion (an Imprint of The Orion P, 2005. Paperback. Condition: Used; Good. **SHIPPED FROM UK** We believe you will be completely satisfied with our quick and reliable service. All orders are dispatched as swiftly as possible! Buy with confidence!. Seller Inventory # mon0000293966