Items related to Elephants on Acid: And Other Bizarre Experiments

Boese, Alex Elephants on Acid: And Other Bizarre Experiments

Elephants on Acid: And Other Bizarre Experiments 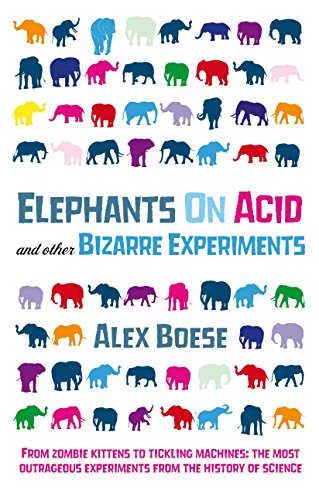 When Tusko the Elephant woke in his pen on 3 August 1962, little did he know that he was about to be given the largest ever single dose of LSD . . .

Elephants on Acid is a wonderfully entertaining, authoritative collection of history’s most bizarre experiments, from the 19th-century creation of zombie kittens to a University of Wisconsin study that answers, definitively, the question of whether women who play hard to get really are more desirable. As well as learning what happened to Tusko, you will discover the 1959 mathematical equation for the point at which chatter at a drinks party becomes loud; whether listening to Mozart makes children super-students; and the secret of how to sleep on planes . . .

* If left to their own devices, would babies instinctively pick a well-balanced diet?

* If you were unfortunate enough to fall down a disused mine shaft, would your dog run to fetch help?

* Which really tastes better in a blind tasting -- Coke, or Pepsi?

'A gripping compendium of the strangest experiments ever conducted in the name of science, from the horrifying to the hilarious' -- The London Paper

'Alex Boese puts the world's most weird and wonderful experiments under the microscope...' -- Independent Extra

From zombie kittens to tickling machines: the most outrageous, provocative and amusing experiments from the history of science

Elephants on Acid: And Other Bizarre Experiments Boese, Alex