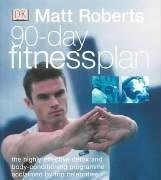 Matt Roberts is the most talked-about personal trainer in town. Celebrities such as Mel C Sting and Trudie Styler swear by his techniques for eliminating fat boosting energy and creating a lean body. Now you too can embark on his revolutionary fitness and detox programme and achieve your own body-conditioning goals in just 90 days!

Matt Roberts is celebrated as a personal trainer to celebrities like Madonna and Sting and reading his 90 Day Fitness Plan you can see how seductively he can encourage the most decadent among us to see fitness as an achievable and highly desirable goal. He starts by setting the record straight about why and how fitness can be achieved. Several myths are dispelled along the way to be replaced by heartening facts. We learn that the only way to achieve true fitness is combining several simple elements. Firstly it's a question of nutrition and overall health. Secondly, Matt is insistent on following a dual programme of resistance training alongside aerobic training. Apparently the key to those finely honed celebrity bodies is muscle utilisation--you've got to keep resistance up or your body will reach a point where it operates too efficiently--even to a point where despite dragging yourself to your gym class you are unable to lose weight or burn fat. Nothing here is intimidating; illustrations and information are clear and engaging and no previous knowledge is assumed.

The plan itself is broken into five "phases". Phase one lays the foundations for a base of fitness. Each phase follows the same pattern: nutritional goals / aerobic training / resistance training and then a series of exercises. As you move through each phase, each of these areas becomes increasingly challenging. The nutritional goals progress quite sharply, the end result being a significant reduction in the amount of dairy, meat, and fat products consumed and achieving an overall detox. The exercises increase in repetition, resistance and duration to a challenging level of fitness. (NB. for the seriously unfit, this is one book where you shouldn't be tempted to skip to the end--it is quite scary!)

It should be added that this book is very much a workbook and you'll ideally have ready access to a gym or at least free weights and basic equipment at home, not to mention a pen and paper to note essential points and monitor your progress. Following this plan in 90 days is an ambitious goal simply because Matt's approach to fitness is pleasingly rigorous and totally holistic. You won't just look fit, you will be fit--very fit. An equally attractive goal could be to double that timeframe but savour each stage of increased energy, vitality, not to mention your new "superstar" physique. --Rachel O'Connor

Matt Roberts started his career in fitness as an international sprinter. During his early twenties, he traveled between London and New York, studying with the American Council for Exercise and the American College of Sports Medicine. In 1994, he opened Matt Roberts Personal Training in London's Mayfair, the UK's first personal training center. Its success was followed by another two state-of-the-art London gyms: Matt Roberts at One in the exclusive On Aldwych hotel and a health club in the Kensington Royal Garden Hotel. Roberts also has a spa n the five-star le St Geran hotel on Mauritius, and plans US and other international centers soon. Elle magazine wrote "Matt Roberts, personal trainer to the likes of John Galliano and Madonna, is probably his own bet advertisement." Other celebrities who have trained with Matt Roberts include Sting and Trudie Styler, Mel C, and Gucci's Tom Ford. Matt Roberts has written for Vogue, Elle, Marie Claire, and W.