Items related to A Grim Almanac of South Yorkshire

A Grim Almanac of South Yorkshire 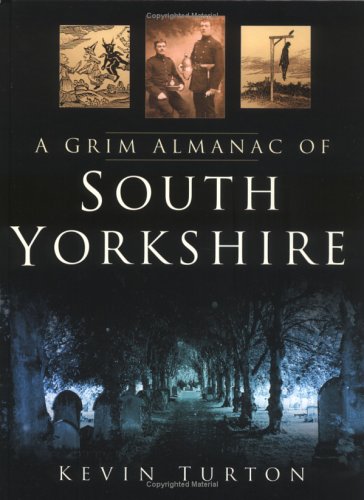 From bodies in wells to withchcraft, highway robbery, suspicious deaths and bizarre murders, this book explores the darker side of South Yorkshire. Kevin Turton has searched meticulously through court records, Victorian newspapers and penny dreadfuls to fing a true grim tale for every day of the year. The stories recounted here include: 31 January 1905 when seven people died as the Scotch express hit a mail train on the Midland Railway at Storrs Mill, Cudworth in heavy fog. !2 February 1803 when Colonel Despard and six others were executed for inciting rebellion in Barnsley. Thirty-four years later while developing land just north of Barnsley a man named William Crossley discovered a hoard of weapons, mainly spears, believed to have been part of Despard's intended arsenal. 17 July 1827 when Jonathan Wilson was almost eaten by a lion called Wallace at Wombwell. The unfortunate man died 8 days later from his injuries.

A native of Yorkshire, Kevin Turton began writing true crime articles in the 1990's. He wrote the Northamptonshire Murders volume in Sutton's county murders series and has also published four other books.

1. A GRIM ALMANAC OF SOUTH YORKSHIRE

Book Description Sutton., 2004. Hardcover / Hardback. Condition: New. First edition. New hardback. A collection of stories from South Yorkshire's past, some bizarre, some fascinating, some macabre, but all equally absorbing. Revealed here are the dark corners of the county, where witches, body snatchers, highwaymen and murderers, in whatever guise, have stalked. Accompanying this cast of gruesome characters are old superstitions, omens, strange beliefs and long-forgotten remedies for all manner of ailments. Illus. 138pp. 4to h/back. Pictorial glazed covers. New. Seller Inventory # 4698