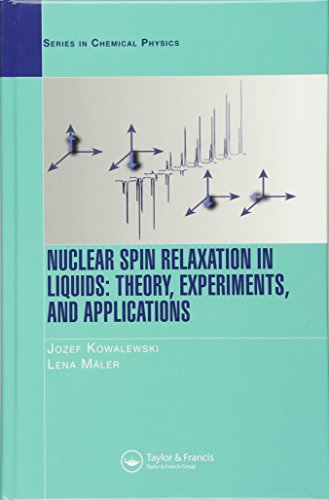 Nuclear magnetic resonance (NMR) is widely used across many fields because of the rich data it produces, and some of the most valuable data come from the study of nuclear spin relaxation in solution. While described to varying degrees in all major NMR books, spin relaxation is often perceived as a difficult, if not obscure, topic, and an accessible, cohesive treatment has been nearly impossible to find.

Collecting relaxation theory, experimental techniques, and illustrative applications into a single volume, this book clarifies the nature of the phenomenon, shows how to study it, and explains why such studies are worthwhile. Coverage ranges from basic to rigorous theory and from simple to sophisticated experimental methods, and the level of detail is somewhat greater than most other NMR texts. Topics include cross-relaxation, multispin phenomena, relaxation studies of molecular dynamics and structure, and special topics such as relaxation in systems with quadrupolar nuclei and paramagnetic systems.

Avoiding overly demanding mathematics, the authors explain relaxation in a manner that anyone with a basic familiarity with NMR can follow, regardless of their specialty. The focus is on illustrating and explaining the physical nature of the phenomena, rather than the intricate details. Nuclear Spin Relaxation in Liquids: Theory, Experiments, and Applications forms useful supplementary reading for graduate students and a valuable desk reference for NMR spectroscopists, whether in chemistry, physics, chemical physics, or biochemistry.