Items related to Towards a Postmodern Theory of Narrative (Postmodern... 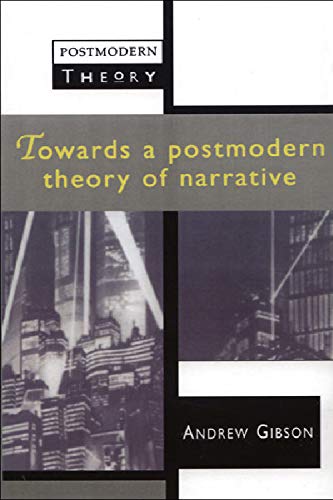 This study re-examines narrative theory and outlines the consequences for narratology of deconstructive, poststructuralist and more recent theory. Andrew Gibson assesses the extent to which narrative theory might be rethought in their light, drawing on the work of Derrida, Deleuze, Lyotard and Foucault. Consistently relating his theoretical investigations to critical practice, Gibson makes telling and perceptive analyses of a variety of twentieth-centry texts including work by Joyce, Fielding, Beckett, Lawrence, Woolf, R L Stevenson, Kundera, Tarkovsky and others. This is an important contribution to contemporary work on narrative.

Andrew Gibson is Research Professor of Modern Literature and Theory at Royal Holloway, University of London, and a member of the Conseil scientifique of the College international de philosophie in Paris. He is the author of Beckett and Badious: The Pathos of Intermittenccy (Oxford University Press, 2006), James Joyce: A Critical Life (Reaktion, 2006) and Towards a Postmodern Theory of Narrative (EUP, 1996).

1. Towards a Postmodern Theory of Narrative

Book Description Edinburgh University Press, 2020. Paperback. Condition: NEW. 9780748608416 This listing is a new book, a title currently in-print which we order directly and immediately from the publisher. Print on Demand title, produced to the highest standard, and there would be a delay in dispatch of around 10 working days. For all enquiries, please contact Herb Tandree Philosophy Books directly - customer service is our primary goal. Seller Inventory # HTANDREE0136356

3. Towards a Postmodern Theory of Narrative