Items related to On Late Style: Music and Literature Against the Grain

Said, Edward On Late Style: Music and Literature Against the Grain

On Late Style: Music and Literature Against the Grain 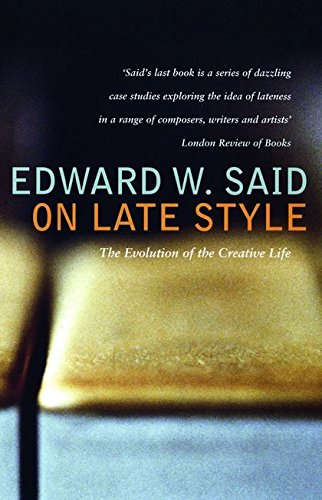 "On Late Style" examines the work produced by great artists - Beethoven, Thomas Mann, Jean Genet among them - at the end of their lives. Said makes it clear that, rather than the resolution of a lifetime's artistic endeavour, most of the late works discussed are rife with contradiction and almost impenetrable complexity. He helps us see how, though these works often stood in direct contrast to the tastes of society, they were, just as often, announcements of what was to come in the artist's discipline - works of true artistic genius.

`An exercise in late style itself, full of melancholy, insight and
humour' -- Hanif Kureishi, New Statesman Books of the Year

`He is one of those few critics who have a masterly intelligence
while never being obscure or baffling' -- Nicholas Lezard, Guardian paperback choice

`Said's last book is a series of dazzling case studies exploring
the idea of lateness in a range of composers, writers and artists' -- London Review of Books

`There is no better description of this gracefully unquiet,
probing and wise book: Said's own elegiac masterpiece of late style' -- Financial Times

`This is criticism of a high order, lucid and generous ... On Late
Style is a touching, fitfully enlightening book' -- Literary Review

Edward W. Said (1935-2003) was born in Jerusalem, brought up in Jerusalem and Cairo, and educted in the United States. The University Professor of English and Comparative Literature at Columbia University, Said wrote twenty-one books which include the seminal Orientalism, Culture and Imperialism and most recently From Oslo to Iraq and the Roadmap also published by Bloomsbury.

1. On Late Style: Music and Literature Against the Grain