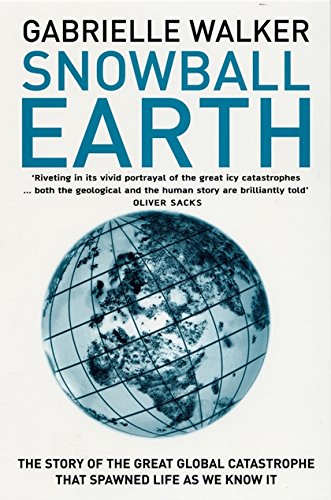 Did the Earth once undergo a super ice age, one that froze the entire planet? A global adventure story and a fascinating account of scientist Paul Hoffman's quest to prove his maverick 'Snowball Earth' theory, this is science writing at its most gripping. In "Snowball Earth", Gabrielle Walker takes us on a thrilling natural history expedition in search of supporting evidence for the audacious theory which argues that the Earth experienced a climatic cataclysm 600 million years ago that froze the entire planet from the poles to the equator. Because the global snowball happened so long ago the ice has now long gone - but it left its traces in rocks around the world and in order to see the evidence, Walker visited such places as Australia, Namibia, South Africa and Death Valley, USA. Part adventure story and part travel book, it's a tale of the ultimate human endeavour to understand our origins.

An engrossing book on the emergence of a stunning new account of events on our primordial planet ... fascinating -- Sunday Telegraph

This is a story worth telling. Racy and pacey ... a very entertaining read -- Independent