Items related to Snowball Earth: The Story of the Global Catastrophe...

Walker, Gabrielle Snowball Earth: The Story of the Global Catastrophe That Spawned Life as We Know it

Snowball Earth: The Story of the Global Catastrophe That Spawned Life as We Know it 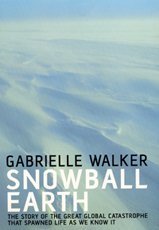 Did the Earth once undergo a super ice age, one that froze the entire planet? A global adventure story and a fascinating account of scientist Paul Hoffman's quest to prove his maverick 'Snowball Earth' theory, this is science writing at its most gripping. In "Snowball Earth", Gabrielle Walker takes us on a thrilling natural history expedition in search of supporting evidence for the audacious theory which argues that the Earth experienced a climatic cataclysm 700 million years ago that froze the entire planet from the poles to the equator.

A global adventure story and an account of scientist Paul Hoffman's quest to prove his maverick 'Snowball Earth' theory. This work takes us on a natural history expedition in search of supporting evidence for the theory which argues that the Earth experienced a climatic cataclysm 700 million years ago that froze the entire planet.