Items related to Celluloid Skyline: New York and the Movies 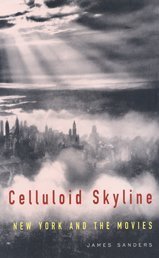 This is a tale of two cities, both called 'New York'. The first is a real city, an urban agglomeration of millions. The second is a mythic city, so rich in memory and association and sense of place that to people everywhere it has come to seem real: the New York of films such as "42nd Street", "Rear Window", "King Kong", "Dead End", "The Naked City", "Ghostbusters", "Annie Hall", "Taxi Driver", and "Do the Right Thing". The dream city of the movies - created by more than a century of films, since the very dawn of the medium itself - may hold the secret to the glamour of its real counterpart. Here are the cocktail parties and power lunches, the subway chases and opening nights, the playground rumbles and observation-deck romances. Here is an invented Gotham, a place designed specifically for action, drama, and adventure, a city of bright avenues and mysterious sidestreets, of soaring towers and intimate corners, where remarkable people do exciting, amusing, romantic, scary things. Sanders takes the reader from the tenement to the penthouse, from New York to Hollywood and back again, from 1896 to the present, all the while showing how the real and mythic cities reflected, changed, and taught each other.

"It is a marvellous account by a practising architect with an encylopaedic knowledge of the movies" -- Phillip French, The Observer, Sunday September 1st 2002

"for those keen to understand New York's place in Western (or even global) consciousness, Sanders is this reader's guide of choice." -- Time Out, 25th September 2002

"one of the most important, and enjoyable, books about the effect of Hollywood on our perception of reality,
in particular, the reality of New York City." -- The Evening Standard, October 11th 2002

James Sanders, an architect, is the co-writer with Ric Burns of the 7-part Emmy-award-winning TV series New York: A Documentary Film and co-author of the companion volume, New York: An Illustrated History. He has written for the New York Times, Los Angeles Times, Vanity Fair and Interiors, and has produced exhibitions on New York architecture.

Book Description Hardback. Condition: Very Good. The book has been read, but is in excellent condition. Pages are intact and not marred by notes or highlighting. The spine remains undamaged. Seller Inventory # GOR002435496

Book Description Hardback. Condition: Good. The book has been read but remains in clean condition. All pages are intact and the cover is intact. Some minor wear to the spine. Seller Inventory # GOR010250100

Book Description Bloomsbury, London, 2002. Hardcover. Condition: Very Good. 1st Edition. Fascinating and hefty volume examining the two New Yorks: the real city and its Hollywood counterpart. Sanders unveils the history of both and how they influenced each other. Features numerous b/w images. Dust-jacket has some wear but contents clean and prim. Very good condition. Due to size extra postage fees may apply to overseas orders. Seller Inventory # 001233