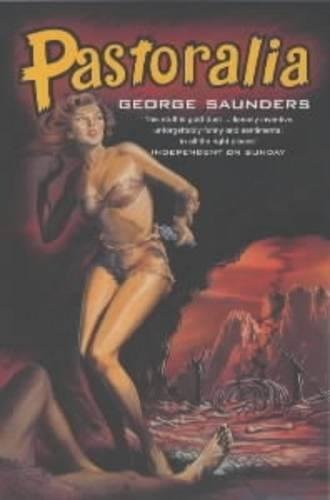 'Saunders is an astoundingly tuned voice - graceful, dark, authentic and funny - telling just the kind of stories we need to get us through these times' Thomas Pynchon In PASTORALIA elements of contemporary life are twisted, merged and amplified into a slightly skewed version of modern America. A couple live and work in a caveman theme-park, where speaking is an instantly punishable offence. A born loser attends a self-help seminar where he is encouraged to rid himself of all the people who are 'crapping in your oatmeal'. And a male exotic dancer and his family are terrorised by their decomposing aunt who visits them with a solemn message from beyond the grave. With an uncanny combination of deadpan naturalism and uproarious humour, George Saunders creates a world that is both indelibly original and yet hauntingly familiar

In both his acclaimed debut, CivilWarLand in Bad Decline, and his second collection, Pastoralia, George Saunders imagines a near future where capitalism has run amok. Consumption and the service economy rule the earth. The Haves are grotesque beings, mutilated by their crass desires and impossible wealth. The Have Nots are no less crippled, both emotionally and physically, by their inferior status. It's a kind of Westworld scenario, but instead of robots, the serving wenches, bellboys, and extras are real people, all of them mercilessly indentured by the free market.

Sounds like bleak stuff, doesn't it? Yet Saunders handles his characters with grace and humour In the title story, for example, a couple occupies a squalid corner of a human zoo, where they act out a parody of caveman times, communicating in grunts and hand motions speaking is instantly punishable by the Orwellian management) and conducting their lives during 15-minute smoke breaks. In "Winky", a born loser (really, all of Saunders's characters are born losers) visits a self-help seminar, where he's encouraged to rid himself of all those people who are "crapping in your oatmeal". Exhilarated at the prospect of dumping his simple, crazy-haired, religion-besotted sister, he returns home to the bleak discovery that he needs her as much as she needs him. The protagonist of "Sea Oak" works as a stripper in an aviation-themed restaurant and lives next to a crack house with his unemployed sisters, their babies, and a sweet old maid of an aunt. The aunt dies, and then returns from the grave--not so sweet, now, and still decomposing--with strange powers and a sobering message:

"You ever been in the grave? It sucks so bad! You regret all the things you never did. You little bitches are going to have a very bad time in the grave unless you get on the stick, believe me!"

The characters and situations in the rest of Pastoralia are equally wretched. But Saunders rescues them from utter despair with a loving belief in the triumph of the human spirit: yes, things can always get worse, but worse is better than the cold dirt of the grave. And in the small space between wretchedness and death there is plenty of room for laughter, and even love. --Tod Nelson

It's like Monty Python mixed with some John Waters with some Jerry Springer thrown in for good measure. -- QX International

This is a formidably assured exercise in black comedy -- Literary Review

This stuff is gold dust... fiercely inventive, unforgettably funny and sentimental in all the right places -- Independent on Sunday

Book Description Paperback. Condition: Very Good. The book has been read, but is in excellent condition. Pages are intact and not marred by notes or highlighting. The spine remains undamaged. Seller Inventory # GOR001169302

Book Description Paperback. Condition: Good. The book has been read but remains in clean condition. All pages are intact and the cover is intact. Some minor wear to the spine. Seller Inventory # GOR001223721

Book Description Bloomsbury Publishing PLC. Paperback. Condition: Good. A copy that has been read, but remains in clean condition. All pages are intact, and the cover is intact. The spine may show signs of wear. Pages can include limited notes and highlighting, and the copy can include previous owner inscriptions. At ThriftBooks, our motto is: Read More, Spend Less. Seller Inventory # G0747553866I3N00

Book Description Bloomsbury Publishing PLC, 2001. Paperback. Condition: Good. Good condition is defined as: a copy that has been read but remains in clean condition. All of the pages are intact and the cover is intact and the spine may show signs of wear. The book may have minor markings which are not specifically mentioned. Most items will be dispatched the same or the next working day. Seller Inventory # wbb0013133876

Book Description Bloomsbury Publishing PLC 03/09/2001, 2001. Condition: Very Good. This book is in very good condition and will be shipped within 24 hours of ordering. The cover may have some limited signs of wear but the pages are clean, intact and the spine remains undamaged. This book has clearly been well maintained and looked after thus far. Money back guarantee if you are not satisfied. See all our books here, order more than 1 book and get discounted shipping. . Seller Inventory # 7719-9780747553861

Book Description Bloomsbury Publishing PLC, 2001. Paperback. Condition: Used; Good. **Simply Brit** Shipped with Premium postal service within 24 hours from the UK with impressive delivery time. We have dispatched from our book depository; items of good condition to over ten million satisfied customers worldwide. We are committed to providing you with reliable and efficient service at all times. Seller Inventory # 1038409

Book Description Bloomsbury Publishing PLC, 2001. Paperback. Condition: Used; Acceptable. **Simply Brit** Shipped with Premium postal service within 24 hours from the UK with impressive delivery time. We have dispatched from our book depository; items of good condition to over ten million satisfied customers worldwide. We are committed to providing you with reliable and efficient service at all times. Seller Inventory # 2803522

Book Description Bloomsbury Publishing PLC, 2001. Paperback. Condition: Used; Good. **SHIPPED FROM UK** We believe you will be completely satisfied with our quick and reliable service. All orders are dispatched as swiftly as possible! Buy with confidence!. Seller Inventory # mon0001462910

Book Description Bloomsbury Publishing PLC 03/09/2001, 2001. Paperback. Condition: Very Good. Shipped within 24 hours from our UK warehouse. Clean, undamaged book with no damage to pages and minimal wear to the cover. Spine still tight, in very good condition. Remember if you are not happy, you are covered by our 100% money back guarantee. Seller Inventory # 6545-9780747553861