Harry Potter and the Goblet of Fire (Book 4) 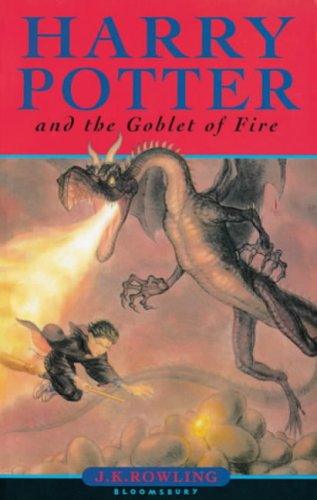 The summer holidays are dragging on and Harry Potter can't wait for the start of the school year. It is his fourth year at Hogwarts School of Witchcraft and Wizardry and there are spells to be learnt and (unluckily) Potions and Divination lessons to be attended. But Harry can't know that the atmosphere is darkening around him, and his worst enemy is preparing a fate that it seems will be inescapable ...With characteristic wit, fast-paced humour and marvellous emotional depth, J.K. Rowling has proved herself yet again to be a master story-teller.

Harry Potter and the Goblet of Fire is the long-awaited, heavily hyped fourth instalment of a phenomenally successful series that has captured the imagination of millions of readers, young and old, across the globe. For J K Rowling the pressure is certainly on to continue to come up with thrilling, pacey storylines that allow her hero to mature into a young man without detracting from the magical secret that has made Harry into a superstar. In this book, the teenage Harry has a certain gawky charm that fits well with his advancing adolescence. As the story moves on, Harry too moves on to a new level of maturity that leaves the reader wondering how he will learn from his experiences, and liking him all the more as a character.

Once returned to Hogwarts after his summer holiday with the dreadful Dursleys and an extraordinary outing to the Quidditch World Cup, the 14-year-old Harry and his fellow pupils are enraptured by the promise of the Triwizard Tournament: an ancient, ritualistic tournament that brings Hogwarts together with two other schools of wizardry--Durmstrang and Beauxbatons--in heated competition. But when Harry's name is pulled from the Goblet of Fire, and he is chosen to champion Hogwarts in the tournament, the trouble really begins. Still reeling from the effects of a terrifying nightmare that has left him shaken, and with the lightning-shaped scar on his head throbbing with pain (a sure sign that the evil Voldemort, Harry's sworn enemy, is close), Harry becomes at once the most popular boy in school. Yet, despite his fame, he is totally unprepared for the furore that follows.

This is a hefty volume: 636 pages, of which probably at least 200 could have been cut without detracting from the story. The weight and complexity of the book is perhaps a hint that Rowling now has her eye sharply focused on her adult audience, and the average child-reader (particularly one who is coming to Harry Potter for the first time) may well find its girth daunting. Rowling's ironic and pointed observations on tabloid journalism and the nature of media hype is just one of the references littered through the book that will tickle the grown-ups but may well fly over the heads of her young fans.

However, after a slow start, Harry Potter and the Goblet of Fire really starts to sparkle halfway through with Rowling's familiar magic (and yes, there is a death--sudden and tragic--and yes, Harry does start to notice girls). The crux of this story, however, is Harry's gradual coming-of-age and his handling of the increasingly determined threats to his own life.

This book is pivotal, not just for the author for whom the heat is well and truly on, but for Harry and his readers who, by the last chapter, are left in little doubt that there is much more to come. (Ages 10 to adult) --Susan Harrison

'I can honestly say I can't remember the last time I encountered an author who has had this effect on me. For the first time in years the book lives up to the hype perfection' Daily Express 'The most remarkable publishing sensation for a generation the story is told with such momentum, imagination and irrepressible humour that it can captivate both adults and children' Sunday Express 'Rowling deserves all the plaudits that are being heaped upon her. For once, the word phenomenon is an understatement' Scotland on Sunday 'Extraordinarily vivid and exceptionally well-imagined' Independent on Sunday

1. HARRY POTTER & THE GOBLET OF FIRE

3. Harry Potter & the Goblet of Fire

Book Description Bloomsbury, London UK, 2001. Soft cover. Condition: New. 1st Edition. Book Description: Bloomsbury Books, London, 2001. Soft cover. Book Condition: New. Giles Greenfield (illustrator). 1st Edition. A fine bright and clean edition with 636 pages all unmarked and white. The spine has a minute nick to bottom left and the front has a little edge wear to top. Book is tight and square and is a 1st.Edition,1st.Printing with number run 1-20. IN VERY GOOD CONDITION. PLEASE CONTACT US BEFORE ORDERNG THIS BOOK TO CONFIRM BOOK CONDITION. Shipping is normally same day from the UK. "UK BASED SELLER ALL OVERSEAS SHIPPING VIA AIRMAIL". If you do not want this service please make it clear to Abebooks you wish by Ship. In Stock.- THANKS! We do not stock Ex-Library or Book Club editions. We offer a money back guarantee if you are not fully satisfied, please contact us if you have any questions. Bookseller Inventory #O. 122813170140. Seller Inventory # 000411

4. HARRY POTTER AND THE GOBLET OF F

5. Harry Potter and the Goblet of Fire. J.K. Rowling

6. Harry Potter and the Goblet of Fire

7. Harry Potter and the Goblet of Fire (Book 4) First Edition

Book Description Bloomsbury Publishing PLC, London, U.K., 2000. Soft cover. Condition: New. No Jacket. 1st Edition. Paperback. London, U.K. English language; First Edition, First Impression. Book Condition: As New. Dust Jacket Condition: None. Numbered Line: 20-1. 636 pp, a clean and bright copy. No signs of foxing. Without dedication. IN EXCELLENT CONDITION. (most of our books are 1st editions). We can send you photos of this book with a detailed description. Shipping is normally same day from the UK. "UK BASED SELLER ALL OVERSEAS SHIPPING VIA AIRMAIL". If you do not want this service please make it clear to Abebooks you wish by Ship. In Stock.- THANKS! We do not stock Ex-Library Editions or Book Club Editions. We offer a money back guarantee if you are not fully satisfied, please contact us if you have any questions. Bookseller Inventory #O.20180218_141155. / 201808_141240_1. Seller Inventory # 003997