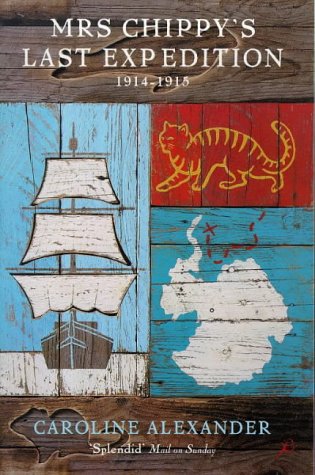 "Now, I can't vouch for the authenticity of this newly found document, but I can say that Alexander has done a fine job...allowing the cat's (and her own) sense of humor to have full run."-- "New York Times Book Review"

It was Mrs. Chippy who led me into the Shackleton story.
I first saw the haunting photograph of this intrepid explorer and the stowaway of the Endurance in a memoir written by Frank Worsely, Shackleton's captain. I was struck by the fact that writing years after the events, after service in a world war, and with all of photographer Frank Hurley's extraordinary photographs to choose from -- Worsley would choose this portrait of Mrs. Chippy as one of a handful of photos to illustrate his book. I detected a story and began compulsively reading everything I could get my hands on about the expedition. Sure enough, I eventually rounded up two photos of Mrs. Chippy, two sketches of "her" (Mrs. Chippy was a tomcat) and 27 descriptions of her antics from books and original diaries. We in fact know more about the ship's cat than about the Bosun of the expedition. It was clear to me that Mrs. Chippy was a much-loved member of the crew and I found myself driven to write her story. I like to say that I was consumed when I wrote The Endurance, but possessed when I wrote Mrs. Chippy. I have never done anything like this, and probably never will again. I broke another contract to write this book -- it was the most irresponsible thing I have ever done, and my agent and friends were rolling their eyes. How to say this?? -- I confesss I believe this is the book I was born to write. I have subsequently discovered two more photos of Mrs. Chippy; in one, she is surrounded by sailors, in the other, by officers in their white duck uniforms. In both, the men look down at this little, self-important creature with undisguised affection. This book is my tribute to the tiny but powerful spirit which clearly moved these men.