Items related to The World for a Shilling: How the Great Exhibition...

Leapman, Michael The World for a Shilling: How the Great Exhibition of 1851 Shaped a Nation

The World for a Shilling: How the Great Exhibition of 1851 Shaped a Nation 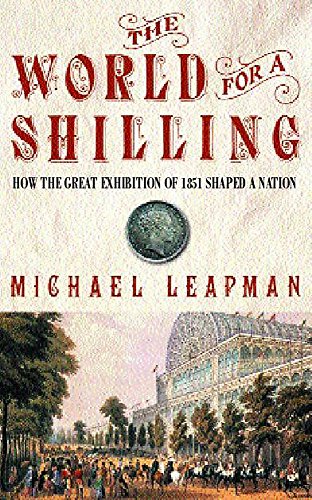 Conceived as a showcase for Britain's burgeoning manufacturing industries and the exotic products of its Empire, the Great Exhibition at the Crystal Palace was Britain's first national spectacle. This book examines the story of how the exhibition came into being; the key characters who made it happen (from Prince Albert, who was credited with the idea, to Thomas Cook, whose cheap railway trips ensured its accessibility to all); and the tales behind the exhibitors and exhibits themselves, from the Koh-i-noor diamond to the more quirky inventions on display - Queen Victoria was very taken with a bed that physically ejected its occupant in the morning, for example. One quarter of the British population had visited the exhibition by its close; this is the story of how it fired the imagination of the era.

`Michael Leapman brings a child's delight to the wonders of the Exhibition and his enthusiastic prose makes his readers feel they are almost walking down its aisles... splendid book' Mail on Sunday (2002-03-24)

Michael Leapman is an award-winning journalist and former editor of The Times Diary. An authority on London, he has written a number of books about the city.

1. The World for a Shilling

2. THE WORLD FOR A SHILLING

3. The World for a Shilling Leapman, Michael