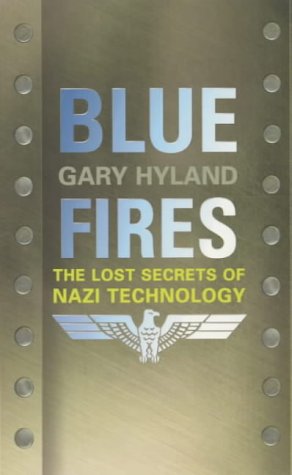 Many theories have been mooted to explain the Roswell incident, most of which involve flying saucers and little green men from Mars. What has never been considered, though, is the odd coincidence that the high-speed, high-flying spherical object which crashed on Roswell bears an uncanny resemblance to some of the extraordinarily futuristic aircraft which were blueprinted in top-secret conditions by Nazi scientists during the Second World War. Blue Fires tells an extraordinary story of cover-ups and conspiracies, and it gives a fascinating alternative version of world history since 1945.

Gary Hyland owns a successful company that produces original sculptures. He has a long-held fascination for the Nazis' development of new technologies during the Second World War.

Book Description Headline Book Publishing, 2001. Paperback. Condition: Very Good. Blue Fires: The Lost Secrets of Nazi Technology This book is in very good condition and will be shipped within 24 hours of ordering. The cover may have some limited signs of wear but the pages are clean, intact and the spine remains undamaged. This book has clearly been well maintained and looked after thus far. Money back guarantee if you are not satisfied. See all our books here, order more than 1 book and get discounted shipping. . Seller Inventory # 7719-9780747264569

Book Description Headline Book Publishing 01/11/2001, 2001. Paperback. Condition: Very Good. Shipped within 24 hours from our UK warehouse. Clean, undamaged book with no damage to pages and minimal wear to the cover. Spine still tight, in very good condition. Remember if you are not happy, you are covered by our 100% money back guarantee. Seller Inventory # 6545-9780747264569

Book Description Headline Book Publishing, 2001. Paperback. Condition: Good. All orders are dispatched the following working day from our UK warehouse. Established in 2004, we have over 500,000 books in stock. No quibble refund if not completely satisfied. Seller Inventory # mon0001411700

Book Description Headline, London, U.K., 2001. Soft cover. Condition: As New. No Jacket. 1st Edition. Paperback; London U.K. English language; Book Condition: New. Dust Jacket Condition: None. 345 pp. Numbered Line: 10-1. Without dedication. Unread condition spine perfect, corners sharp. IN EXCELLENT CONDITION, PLEASE CONTACT US BEFORE ORDERING THIS BOOK TO CONFIRM BOOK CONDITION AND EDITION (most of our books are 1st editions). We can send you photos of this book with a detailed description. Shipping is normally same day from the UK. "UK BASED SELLER ALL OVERSEAS SHIPPING VIA AIRMAIL". If you do not want this service please make it clear to Abebooks you wish by Ship. In Stock.- THANKS! We do not stock Ex-Library or Book Club editions. We do not stock ex-library or Book Club editions. We offer a money back guarantee if you are not fully satisfied, please contact us if you have any questions. Bookseller Inventory #O. 20171101_092337. Seller Inventory # 003779