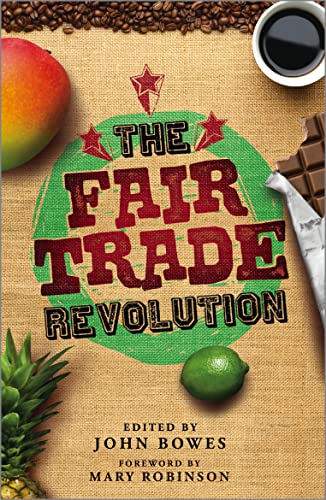 Fair Trade has come a long way in the last 20 years. The Fair Trade Revolution celebrates the movement's achievement and takes up the challenge of improving more lives through fair dealing with producers.

Fair Trade is now mainstream, with large companies like Cadbury's and supermarkets such as Sainsbury's producing and stocking many Fair Trade products. The authors of this collection, many of whom were responsible for the initial success of Fair Trade, emphasise the importance of ensuring that farmers and other producers remain the main beneficiaries. Punchy chapters, illustrated with many real-world examples, cover all the important issues including the tensions between large and small operators, the impact of recession, environmental policy and the danger of large operators embracing Fair Trade more in word than in practice.

Written by the leading lights of the Fair Trade movement, including Harriet Lamb (Executive Director of the Fairtrade Foundation) and Bruce Crowther (Establisher of the world's first Fair Trade Town) this book will inspire activists and consumers to keep making the right choices.

Fairtrade has brought considerable benefits to millions of the poor, but is still in its infancy. This highly readable account will help Fairtrade to grow and for the benefits to spread to millions more. (John Madeley, co-author 50 Reasons to Buy Fair Trade)

This book provides an insightful and important analysis of the development of the Fair Trade movement worldwide, built around the experiences and perspectives of several of the key individuals who led the way. (Mary Robinson, from the foreword)

John Bowes is chairman of Twin, a producer-owned membership organisation dedicated to developing the fair trade supply chain for coffee, nuts, cocoa, sugar and fruit farmers. He previously worked for the Co-operative Group, where he was responsible for all of their ground breaking initiatives on Fair Trade. These included being the first retailer to stock Café Direct coffee, the first to introduce an own brand Fair Trade product and the first to import Fair Trade bananas into the UK.

Book Description Condition: New. Brand New Original US Edition.We Ship to PO BOX Address also. EXPEDITED shipping option also available for faster delivery.This item may ship fro the US or other locations in India depending on your location and availability. Seller Inventory # AUDEC-26010

Book Description PAPERBACK. Condition: New. Book Cover and ISBN may be different from US edition but contents as same US Edition. Excellent Quality,Quick delivery by USPS/UPS/FEDEX/DHL/ARAMEX, We may ship the books from Asian regions for inventory purpose. Our courier service is not available at PO BOX. Seller Inventory # abe_jan_9780745330785