Items related to James Joyce and Critical Theory: An Introduction 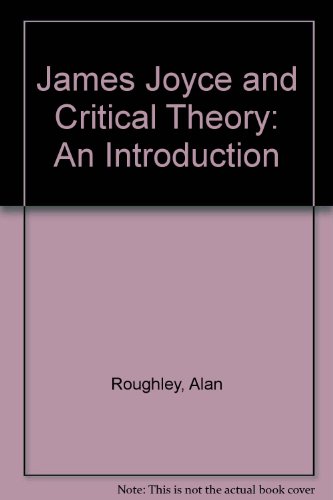 An examination of the theories of criticism which have been applied to Joyce's work since the emergence of structuralist theory and a consideration of the ways in which Joyce's writing practice has, in turn, influenced these theories. The book is divided into separate chapters on semiotics, structuralism, Marxism, psycho-analytic theory and post-structuralism, with two chapters devoted to feminist criticism and interpretation of Joyce's work. The book also looks at how Joyce's writing, particularly "Ulysses" and "Finnegan's Wake" have been adopted by the critical community as models for theories about language and writing.

Book Description Prentice-Hall, 1991. Paperback. Condition: Good. Good condition is defined as: a copy that has been read but remains in clean condition. All of the pages are intact and the cover is intact and the spine may show signs of wear. The book may have minor markings which are not specifically mentioned. Most items will be dispatched the same or the next working day. Seller Inventory # mon0015755133

Book Description Prentice-Hall, 1991. Condition: Good. A+ Customer service! Satisfaction Guaranteed! Book is in Used-Good condition. Pages and cover are clean and intact. Used items may not include supplementary materials such as CDs or access codes. May show signs of minor shelf wear and contain limited notes and highlighting. Seller Inventory # 0745010180-2-4