Items related to Who is the World For?

Pow, Tom; Ingpen, Robert Who is the World For?

Who is the World For? 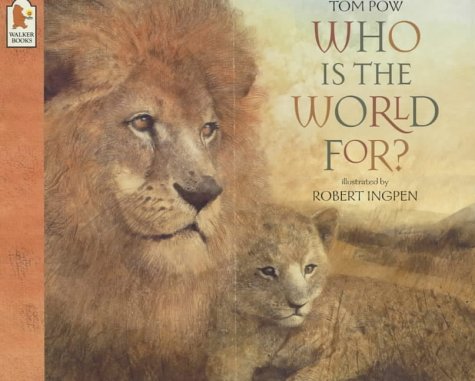 "Who is the world for?" asks the baby bear in her winter cave and the lion cub on his grassy plain and the baby hippo in the slow brown river. All over the world - in deep roomy seas, on high, green trees, in ice and snow - baby animals ask their parents this question. In a house in the city, the boy asks his father too - receiving the same emphatic proclamation in reply, "The world is for you!"

"Wonderful, painterly illustrations by Robert Ingpen... an ideal book to be shared in class or assembly... The text reads aloud well and the pictures are to be examined and wondered at again and again." Literacy and Learning "Memorable." The Times "A secular hymn for a wonderful but threatened planet. Haunting illustrations." The Glasgow Herald "This is a beautiful book." The School Librarian

Tom Pow is one of Scotland's best-known poets. The winner of two Scottish Arts Council Book Awards for his poetry, he is also the author of three radio plays and a travel book about Peru. Who Is the World For? is his first picture book and was written for his own children, while he was travelling through Africa a couple of years ago. "I missed them desperately!" he says. "I had just visited the Masai Mara so animals were also very much on my mind." Robert Ingpen has published more than one hundred books in the past thirty years. In 1986 he was awarded the prestigious international illustration award, the Hans Christian Andersen Medal, and in 1989 he received the Dromkeen Medal for his contribution to illustration in his home country, Australia. Robert is married with four grown-up children and four grandchildren.

1. Who Is the World For? Pow, Tom and Ingpen, Robert