Items related to Stormy Weather: The Life of Lena Horne 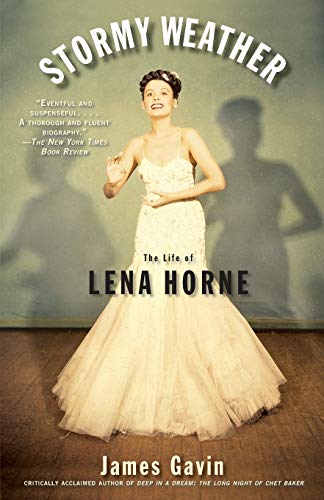 Stormy Weather is a biography of Lena Horne, one Hollywood's stars, and one of the first Tony and Grammy winning stars, who opened doors for black female entertainers such as Eartha Kitt, Sarah Vaughn, Diahann Carroll, Aretha Franklin, and Diana Ross, to name a few. She was glamorous, seductive, and dignified. But under her well-crafted look of elegance and grace, lay a tidal wave of rage. By the 90s, as a defence mechanism, she had shut nearly everyone out of her life. James Gavin tells the story of Lena: the legend and the mystery. He has amassed an incredible collection of source material including: 60 hours of recorded conversations with the singer dating back to the early 50s. 40 hours of TV specials, guest appearances and other rare footage spanning her career. He has interviewed among many others: Johnny Mathis, Bobby Short, Abbey Lincoln, Ruby Dee, Carmen Delavallade, Geoffrey Holder, and Ms Horne herself.

Stormy Weather Now in paperback a definitive biography of Lena Horne, among the first African American icons and most celebrated stars of film, stage and music Full description

"MAGNIFICENT, GRIPPING, MARVELOUSLY WRITTEN . . . [IT] MAY JUST BE ONE OF THE BEST BIOGRAPHIES ABOUT SHOW BUSINESS, RACE, LOVE, SEX, AND MUSIC EVER WRITTEN." --LIZ SMITH, VARIETY

"IN GAVIN'S CAPABLE HANDS, LENA HORNE'S STORY IS BOTH UNIQUELY HER OWN AND AN INTEGRAL PART OF A LARGER CULTURAL JOURNEY." --SAN FRANCISCO CHRONICLE

"SYMPATHETIC AND TOUGH." --THE NEW YORKER

"A FASCINATING STUDY OF A COMPLICATED WOMAN AND THE
COMPLICATED TIMES THAT SHAPED HER." --USA TODAY