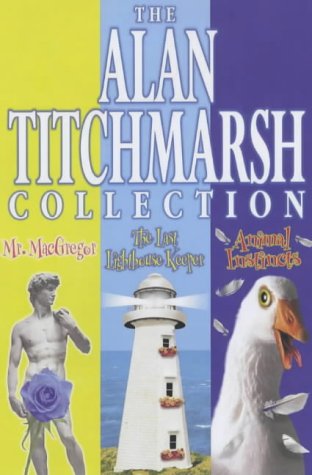 From the immensely popular and bestselling novelist comes a collection of three deliciously entertaining novels. Spanning the world of TV gardening in MR McGREGOR, to the nautical Cornish coastline captured in THE LAST LIGHTHOUSE KEEPER and the Devon nature reserve of ANIMAL INSTINCTS, Alan Titchmarsh fills his novels with his trademark blend of humour and romance. When Rob McGregor is picked as the new presenter of a struggling gardening programme, he quickly becomes a favourite with everyone. And that's half his trouble...Will Elliot is out of a job. The lighthouse he's been manning is to become automated. So he decides to take the plunge and fulfill a lifelong ambition - to sail around the coastline of Britain. But he hasn't reckoned on the arrival of Amy Finn, a beautiful artist and fellow loner...When Kit Lavery's father dies, he is forced to return home from Australia to sort out his affairs. A well known champion of wildlife, Rupert Lavery has left behind a nature reserve in Devon, staffed by two very determined women. All Kit wants to do is sell his father's estate quickly and get back to Australia...or so he thinks.

'An atmospheric love story...grab yourself a Cornish pasty and a nice glass of cider and get stuck in to a novel that's nautical but nice' DAILY MAIL; 'Great fun, but also sensitive and sensible with a tuneful storyline. Titchmarsh fans will lap up Mr McGregor' INDEPENDENT 'Humorous, lighthearted and unpretentious...ideal for romantic gardeners' MAIL ON SUNDAY; 'It's as satisfying as a freshly mown lawn' DAILY MIRROR 'A steamy novel of love among the gro bags' OBSERVER