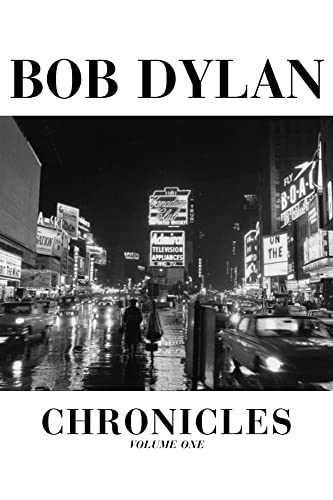 Building on the success of Bob Dylan in His Own Words, an autobiographical portrait of the acclaimed musical performer recounts personal and professional experiences and features black-and-white photography. 250,000 first printing.

As the first volume of Chronicles, Bob Dylan’s long-anticipated autobiography, finally appears, we are given a forcible reminder how it has never been easy to be a Dylan admirer. How could the fiercely anti-establishment composer of With God on Our Side embrace (in turn) orthodox Judaism, then fundamentalist Christianity – two religions absolutely antithetical to his celebration of the unfettered human spirit ? How could the demigod of folk (and disciple of Woody Guthrie) make his controversial move into electric rock? How could this man of the streets become the arch capitalist? If no answers to these questions are to be found within the pages of Chronicles, there is nevertheless a whole host of pleasures to be encountered: literary felicities, brilliantly etched pen portraits of musical personalities he has encountered, the biting wit one might expect – not to mention a thousand surprises (how could a man hardly noted for the beauty of his vocal tones be such an admirer of composers whose work he could never tackle, such as Harold Arlen, composer of Over the Rainbow?.

Those who have loved Dylan’s lyrics (and that’s a good chunk of the academic world these days) will find the same coruscating prose here: idea and image fused into brilliant (if often opaque) word pictures, as Dylan takes us back to his early days on the New York folk scene, before he became the face of rebellion in music. There are insights into his reluctance to conform to the image his fans have of him (hence his highly unlikely conversion to religious dogmas?), and this inaugural volume of his autobiography takes the reader up to the moment of his first real celebrity. It’s a fascinating and infuriating read, of a piece with Dylan the Enigma. And perhaps answers to those unanswered questions will appear in succeeding volumes. --Barry Forshaw

'Like discovering the lost diaries of Shakespeare . . . Maybe the most extraordinarily intimate autobiography by a 20th-century legend' -- Daily Telegraph, October 7, 2004

'There are enough bizarre and entertaining snippets of information sprinkled throughout to fascinate the most jaded Dylan obsessive' -- Independent, October 8, 2004

‘Takes its place next to On The Road . . . as an essential record of an American artist’s manifest destiny’ -- Observer, October 10, 2004

Book Description 2004. Hardcover. Condition: New. Hardcover. "I'd come from a long ways off and had started a long ways down. But now destiny was about to manifest itself. I felt like it was looking right at me and nobod.Shipping may be from our Sydney, NSW warehouse or from our UK or US warehouse, depending on stock availability. 293 pages. 0.472. Seller Inventory # 9780743228152