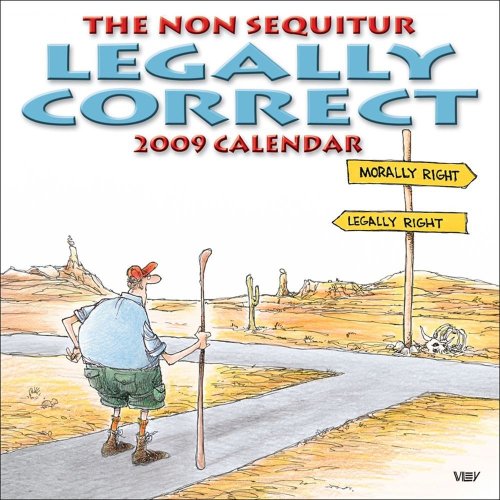 Though translated from Latin as "it does not follow," Non Sequitur actually boasts many followers. This sometimes political, often satirical, occasionally purely silly, but always funny comic strip is one of the most popular and well-respected features on the comic page today. Also appearing online and in books, Wiley Miller's uniquely twisted take on everyday life is faithfully followed and read by millions of readers each day.

* Critically acclaimed and award-winning, Non Sequitur is the only comic to win the Reuben "Best Comic Strip" division award in its first year of syndication. Non Sequitur has also won three times in the "Best Syndicated Panel" division.

The Non Sequitur wall calendar features Wiley's favorite strips on lawyers and the legal profession, a subject on which he receives some of the most feedback. The Non Sequitur Legally Correct 2009 Calendar is a hilarious collection of legal lampoons that will appeal to everyone who either reviles or respects lawyers. Yes, it's true: It's not only the lawyer-haters who write in; many in the legal profession love Wiley's legal humor as well. It's a calendar made in legal heaven.