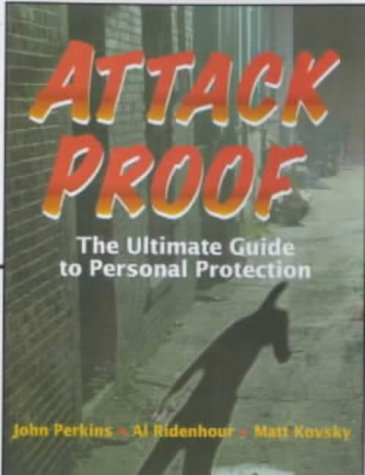 This volume presents a personal protection system for anticipating and fending off even the most brutal assaults. Unlike most martial arts systems, which teach patterned, choreographed techniques that often don't work during street fights, this system prepares people for situations involving random motion and guided chaos. People learn to create a defence during attacks using principles of movement and physics. This book provides a wide selection of basic to advanced tactics and principles with accompanying photographs showing correct positioning and manoeuvres. Readers will learn what to do, what not to do, if the worst should happen and they are confronted with a potentially life threatening situation.

John Perkins has been called America's foremost self-protection expert by the Trends Research Institute. He has been training and teaching martial arts and self-defense for over 45 years. Perkins has taught hand-to-hand tactics to Marine Combat units, Marine Scout Sniper units, and Military joint task force/counter drug forces. He also has instructed law enforcement personnel from the New York City Police Department, New York State Police, and the New York City Transit Police. A bodyguard to the late Malcolm Forbes, Perkins is a forensic crime scene expert and a master handgun instructor and marksman. He has extensive experience in the martial arts of hapkido, taekwondo, kyukushinkai, kempo karate, judo, jujitsu, goju, and tai chi chuan. He has trained in Native American fighting principles since the age of five. Perkins has battled in unlicensed pit fights--a savage forerunner to today's Ultimate Competitions. He is the founder of ki chuan do (KCD), which translates into "The Way of the Spirit Fist" or simply "Ghostfist," which the Guided Chaos principles detailed in this book are drawn from. KCD is recognized by the International Combat Martial Arts Federation through which he also holds a fifth-degree black belt in combat martial arts. Perkins lives in Nyack, New York. Al Ridenhour, a Major in the United States Marine Corps Reserves, has been training in the martial arts since 1985. He has studied tai chi, isshinryu karate, and ken jitsu. An all-conference wrestler in high school who later learned boxing in the Marine Corps, Ridenhour is now a fifth-degree black belt in ki chuan do. He is a veteran of the Gulf War, where he commanded a 50-man infantry unit and served as an instructor in unarmed combat for his Marine unit and for the battalion's Scout Sniper platoon. He has also worked with various law enforcement agencies--U.S. Customs, U.S. Border Patrol, and the Drug Enforcement Agency--during counter drug missions. Ridenhour has received numerous honors, including the Navy Achievement Medal, a combat action ribbon, the National Defense Medal, and the Kuwait Liberation Medal, which he was awarded by the United States Naval Service after the Gulf War. A member of the International Combat Martial Arts Federation, Ridenhour lives in White Plains, New York. Matt Kovsky is an editor for CBS television. His work has earned him two Emmys--one for outstanding editing and another for producer of an outstanding entertainment series--as well as many other awards. Among his list of honors is a gold medal presented at the New York Film & TV Festival, a gold medal presented by the National Mature Market Media Festival, and a bronze medal presented by the National Educational Film Festival. He is the chronicler whose notebooks laid the foundation for Attack Proof. He is trained in isshinryu karate and jeet kune do, and he has a fourth-degree black belt in ki chuan do. Kovsky resides in Ossining, New York.