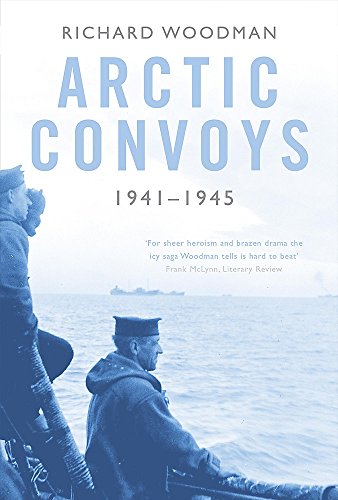 For the last four gruelling years of the war, the Western Allies supplied arms and ammunition to Soviet Russia, essential to the Russian war effort. Allied merchant ships ran the gauntlet of the icy Barents Sea, outflanked by German bases in Norway, from where bombers, surface warships and U-boats could attack without warning. Each delivery of arms was an epic achievement; an eminent British historian described it as undertaking the impossible.

The debacle of PQ17, the surface actions, the U-boat attacks and running air battles culminating in the final destruction of the Scharnhorst are fully covered, but so too are the personal angle and the perspective of the long-suffering merchant ships and their crews, together with the political implications.

Those of us who sailed on the Arctic Convoys are teh best judges of books written about them; and I can say with truth that this account is the most comprehensive and the most accurate I have ever read, relying as it does not only on official British and German sources but on the often heartbreaking accounts of participants and survivors (Ludovic Kennedy)

For sheer heroism and brazen drama the icy saga Woodman tells is hard to beat ... His comprehensive and exciting narrative is a splendid achievement. As a ship's captain he is especially well qualified to explore the hazards mariners faced in the Barents Sea (Frank McLynn, Literary Review)

Woodman has written a necessary and valuable book ... [and] describes vividly the huge seas and freezing cold which were as unpleasant as anything produced by German firepower (Alan Ross, The Spectator)

[Arctic Convoys] is an admirable work of scholarship ... It is also a gripping narrative, filled with stories of bravery, self-sacrifice and sheer doggedness which at times defy credibility (John Keegan, Daily Telegraph)

Book Description Paperback. Condition: Very Good. The book has been read, but is in excellent condition. Pages are intact and not marred by notes or highlighting. The spine remains undamaged. Seller Inventory # GOR002092159

Book Description John Murray 26/04/2004, 2004. Paperback. Condition: Very Good. Shipped within 24 hours from our UK warehouse. Clean, undamaged book with no damage to pages and minimal wear to the cover. Spine still tight, in very good condition. Remember if you are not happy, you are covered by our 100% money back guarantee. Seller Inventory # 6545-9780719566172

Book Description -. Paperback. Condition: Very Good. Arctic Convoys 1941-1945 This book is in very good condition and will be shipped within 24 hours of ordering. The cover may have some limited signs of wear but the pages are clean, intact and the spine remains undamaged. This book has clearly been well maintained and looked after thus far. Money back guarantee if you are not satisfied. See all our books here, order more than 1 book and get discounted shipping. Seller Inventory # 7719-9780719566172

Book Description John Murray, 2004. Condition: Good. A+ Customer service! Satisfaction Guaranteed! Book is in Used-Good condition. Pages and cover are clean and intact. Used items may not include supplementary materials such as CDs or access codes. May show signs of minor shelf wear and contain limited notes and highlighting. Seller Inventory # 0719566177-2-4