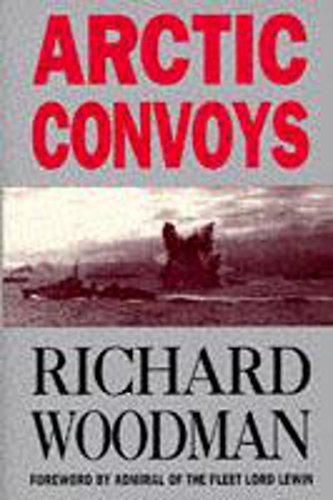 This is an account of the Arctic convoys, which, for the last four years of the war, supplied arms and ammunition to Soviet Russia. These supplies were essential to the Russian war effort, and the Allies' merchant ships ran the gauntlet of the Barent Sea, outflanked by the German bases in Norway.

Richard Woodman is well-known for his Nathaniel Drinkwater series of historical naval novels, a dozen other sea-stories, histories of the development of ships and works on sea-power during the Napoleonic Wars. He has also produced two widely acclaimed studies of convoys operations during the Second World War, Malta Convoys and Arctic Convoys.

Book Description John Murray 15/06/1995, 1995. Paperback. Condition: Very Good. Shipped within 24 hours from our UK warehouse. Clean, undamaged book with no damage to pages and minimal wear to the cover. Spine still tight, in very good condition. Remember if you are not happy, you are covered by our 100% money back guarantee. Seller Inventory # 6545-9780719557521

Book Description -. Paperback. Condition: Very Good. Arctic Convoys 1941-1945 This book is in very good condition and will be shipped within 24 hours of ordering. The cover may have some limited signs of wear but the pages are clean, intact and the spine remains undamaged. This book has clearly been well maintained and looked after thus far. Money back guarantee if you are not satisfied. See all our books here, order more than 1 book and get discounted shipping. Seller Inventory # 7719-9780719557521

Book Description John Murray Pubs Ltd, 1996. Condition: Good. A+ Customer service! Satisfaction Guaranteed! Book is in Used-Good condition. Pages and cover are clean and intact. Used items may not include supplementary materials such as CDs or access codes. May show signs of minor shelf wear and contain limited notes and highlighting. Seller Inventory # 0719557526-2-4