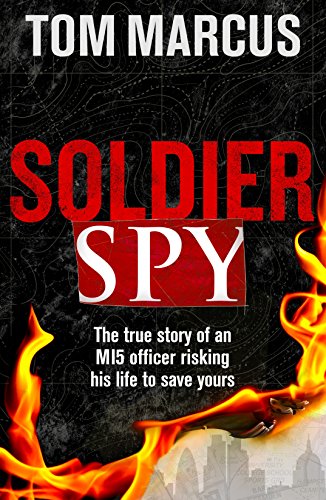 AN INSIDER'S ACCOUNT OF WHAT IT TAKES TO KEEP YOU SAFE

Extraordinarily visceral, nail-biting and hard hitting SOLDIER SPY is his ground-level account of what is what it takes to protect us, and the terrible toll it can exact on those who do.

For the very first time an MI5 undercover surveillance officer provides an unputdownable, eye-opening account of the on-going struggle to keep Britain's streets safe and terror free. (from the publisher's description)

Gripping. One of the most successful MI5 undercover surveillance officers of his time (Sun)

Very well written, gives a startling amount of operational detail, the biggest shock of all - MI5 agreed to its publication (Sunday Times)

'My world was dark, no colour, no right or wrong and no back-up. People like me exist to fight those no one else dares face. I wasn't the last resort; I was the only option'

Tom Marcus was recruited by MI5 in the wake of the 7/7 attacks on London. After five years spent undercover as part of a covert British Army special operations unit he offered the Security Service the edge they so desperately needed.

Following months of intensive training, Marcus was thrown into a world of relentless, unimaginable pressure; a never-ending struggle to prevent terrorist atrocities on our city streets, foil devastating strikes against the nation's infrastructure, and keep our country's secrets safe from foreign spies. Split second decisions carried life or death consequences. And not all his colleagues would survive the fight.

In this explosive first-hand account, Soldier Spy lifts the lid on the war being waged by MI5 to keep us safe in our towns and cities for the first time; a blistering, visceral insight into life on the front line against terror, revealed in never-before-seen detail.

It was a job which would inevitably exact a heavy price. But when it came down to it, Marcus knew he didn't have a choice.

'Some people join the service out of a sense of duty, some out of wanting to do some good by removing the evil. I did it beacsue it's all I knew. I'm a hunter of people and I'm damn good at it.'

Book Description Paperback. Condition: Very Good. Connecting readers with great books since 1972! Used books may not include companion materials, and may have some shelf wear or limited writing. We ship orders daily and Customer Service is our top priority!. Seller Inventory # S_340551738

Book Description Condition: Very Good. This book is in very good condition and will be shipped within 24 hours of ordering. The cover may have some limited signs of wear but the pages are clean, intact and the spine remains undamaged. This book has clearly been well maintained and looked after thus far. Money back guarantee if you are not satisfied. See all our books here, order more than 1 book and get discounted shipping. . Seller Inventory # 7719-9780718184858

Book Description Condition: Very Good. Shipped within 24 hours from our UK warehouse. Clean, undamaged book with no damage to pages and minimal wear to the cover. Spine still tight, in very good condition. Remember if you are not happy, you are covered by our 100% money back guarantee. Seller Inventory # 6545-9780718184858

Book Description Condition: Good. Ships from the UK. Former library book; may include library markings. Used book that is in clean, average condition without any missing pages. Seller Inventory # 39145490-20

Book Description Condition: Very Good. Ships from the UK. Former library book; may include library markings. Used book that is in excellent condition. May show signs of wear or have minor defects. Seller Inventory # 39956699-20

Book Description Paperback. Condition: Used; Good. **SHIPPED FROM UK** We believe you will be completely satisfied with our quick and reliable service. All orders are dispatched as swiftly as possible! Buy with confidence! Greener Books. Seller Inventory # 3037443

Book Description Paperback. Condition: Used; Good. **Simply Brit** Shipped with Premium postal service within 24 hours from the UK with impressive delivery time. We have dispatched from our book depository; items of good condition to over ten million satisfied customers worldwide. We are committed to providing you with reliable and efficient service at all times. Seller Inventory # 2117941