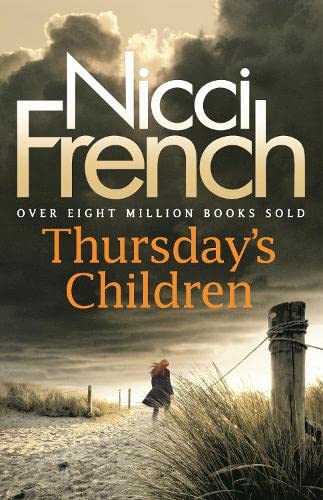 When psychotherapist Frieda Klein left the sleepy Suffolk coastal town in which she grew up she never intended to return. Left behind were friends, family, lives and loves but alongside them, painful memories; a past she wouldn't allow to destroy her.

Then, years later, an old classmate appears in London asking Frieda to help her teenage daughter and long buried memories resurface. Death soon follows, leaving Frieda no choice but to return home to confront her past. And the monsters no one else believed were real . . .

Through a fog of conflicting accounts, hidden agendas and questionable alibis, Frieda can trust no one as she tries to piece together the shocking truth, past and present. Before another innocent dies.

When it comes to psychological suspense, there's none better than Nicci French. And Thursday's Children is Nicci French at her very best.
There are three previous novels in the Frieda Klein series; look out for Blue Monday, Tuesday's Gone and Waiting for Wednesday.

Praise for the Frieda Klein series:

'Nicci French's sophisticated, compassionate and gripping crime novels stand head and shoulders above the competition. No one understands human psychological frailty better. No one writes better about grief, love, fear or emotional damage. Not many books are as insightful as they are addictive; Nicci French's are.'
SOPHIE HANNAH

Twenty years ago teenager Frieda Klein was brutally attacked in her own home. No one believed her - not the police, not her mother, not her friends. She left town, trained as a psychologist and never went back.

Now an old classmate has shown up. She wants help with her daughter, who claims to have been attacked at home. An attack eerily similar to the one on Frieda. No one else believes the girl's story.

Now - with a school reunion in the offing - Frieda returns to the darkness she fled. To the small town which refused to help her and which hides a terrible secret. Because someone at the reunion knows what happened.

And they'll stop at nothing to prevent Frieda discovering the truth . . .

'Expert in the unguessable twist, supremely at ratcheting up the tension' Easy Living