Items related to The Joy of No Sex: A Guide to Life Without Lovemaking

Drew, Roger; Smith, Will The Joy of No Sex: A Guide to Life Without Lovemaking

The Joy of No Sex: A Guide to Life Without Lovemaking 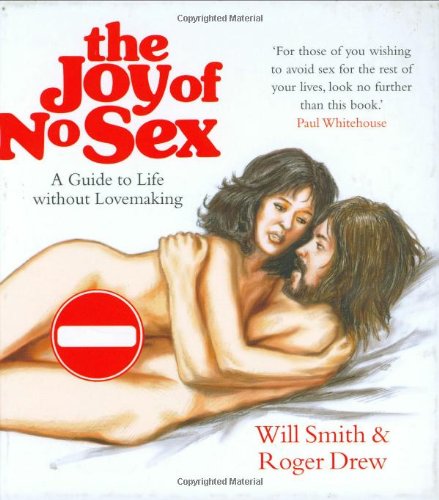 38-year-old Robert Bennett has recently undergone a revelation: he doesn't actually like sex. He has never derived great pleasure from sex, and nor has any woman he's slept with. He still has a sex drive, mind, and he is still attracted to his wife, but he believes that the things we get from sex can be got from other activities that are more rewarding, and less messy. Why go through all the awkwardness of sex to have an orgasm when you can get there by enjoying a good old sneeze instead? Why spend hours fumbling around with your partner's bits when you can strengthen your marriage by taking up hobbies together such as taxidermy and matchstick cathedral modelling?

This is the gospel Robert wishes to spread, and the result is this hilarious guide to life without sex. Wonderfully illustrated with spoof drawings based on Alex Comfort's The Joy of Sex, it is irreverent, outrageous and very funny.

'For those of you wishing to avoid sex for the rest of your lives, look no further than this book' -- Paul Whitehouse

'I only looked at the pictures. And they scared me' -- Armando Iannucci

'In the morass of self-help literature, The Joy of No Sex stands out like a big cock' -- Ardal O'Hanlon

'This book is the perfect antidote to our sex-addled times' -- Al Murray, The Pub Landlord

WILL SMITH and ROGER DREW are television writers who have worked for many comedy greats including Terry Jones, Paul Whitehouse, Johnny Vegas, Alexei Sayle, Armando Iannucci and Bob Monkhouse.

WILL SMITH is a stand-up comedian and has toured with Ardal O'Hanlon and Johnny Vegas, and is the current Time Out Award Winner For Outstanding Comedy. He is a regular roving reporter on Richard and Judy, received rave reviews for his show at the Edinburgh Fringe Festival, and performed at the Royal Variety Performance 2004.

ROGER DREW has produced artwork for magazines, adverts and television shows such as Alexei Sayle's Merry-Go-Round and Johnny Vaughan Tonight. He also provided the sleeve art for the hit single 'I Believe In A Thing Called Love' by the Darkness.

1. Joy of No Sex: A Guide To Life Without Lovemaking