Items related to Nineteenth-Century Ireland: The Search for Stability:... 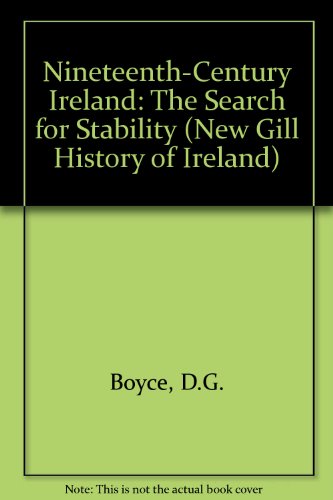 The search for stability proved elusive. Nationalist Ireland mobilised a mass democratic movement under O'Connell to secure Catholic Emancipation before seeing its world transformed by the social cataclysm of the Great Famine. At the same time, the Protestant north-east of Ulster was feeling the first benefits of the Industrial Revolution. Although post-Famine Ireland modernised rapidly, only the north-east had a modern economy. The mixture of Protestantism and manufacturing industry integrated into the greater United Kingdom and gave a new twist to the traditional Irish Protestant hostility to Catholic political demands. In the home rule period from the 1880s to 1914, the prospect of partition moved from being almost unthinkable to being almost inevitable. Nineteenth-century Ireland collapsed in the various wars and rebellions of 1912-22. Like many other parts of Europe than and since, it had proved that an imperial superstructure can contain domestic ethnic rivalries, but cannot always eliminate them. "...a substantial and thoroughly crafted study of a very complex period.... His virtues as a historian predominate - clarity of thought and style, and a mastery of the telling quotation, which penetrates to the heart of the matter." The Irish Times

Professor D. George Boyce is a graduate of Queen's University Belfast. He was an archivist in the Department of Western Manuscripts, Bodleian Library Oxford between 1968 and 1971, and then lectured in the Department of Politics and International relations in Swansea University from 1971 until 2004. A fellow of the Royal Historical Society, he has written books and articles on modern British, Irish, imperial and military history and politics, including Nationalism in Ireland, Decolonisation and the British Empire and The Falklands War.