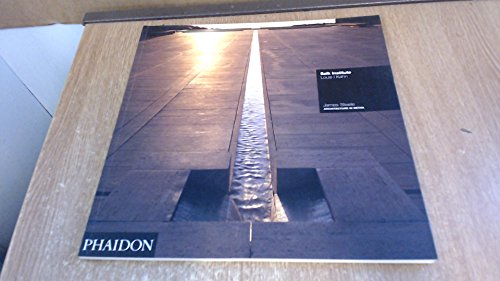 Louis Kahn's Salk Institute for Biological Studies sits high above the Pacific Ocean at La Jolla, Southern California. The project presented Kahn with the opportunity to design for a closed community, in this case scientists, involved in concentrated research. In formulating his response to both the programme and the site, Kahn drew inspiration, from such traditional prototypes as monasteries and other forms of intellectual retreat. Kahn distinguished between the large, free-plan spaces of the laboratories and the rooms for private study, expressing these cell-like spaces as wooden panelled apertures set into otherwise bare concrete walls. As a complex, it remained incomplete at Kahn's death but it survives as an enduring reminder of his humanism and architectural genius.

'The Architecture in Detail series is without question one of the most beautifully illustrated and well-documented collections of monographs on individual buildings produced anywhere in the World.'

James Steele is Associate Professor at the University of Southern California in Los Angeles and has written frequently for Architectural Design, Architectural Review and Mimar.

Book Description Condition: Good. This is an ex-library book and may have the usual library/used-book markings inside.This book has soft covers. In good all round condition. Please note the Image in this listing is a stock photo and may not match the covers of the actual item,500grams, ISBN:0714829145. Seller Inventory # 9303505

Book Description Paperback. Condition: Very Good. Unnumbered pages. The book is a little water damaged on the bottom edge of the pages, while the cover has a few dents. Books listed here are not stored at the shop. Please contact us if you want to pick up a book from Newtown. Seller Inventory # 155780

Book Description Condition: Good. A+ Customer service! Satisfaction Guaranteed! Book is in Used-Good condition. Pages and cover are clean and intact. Used items may not include supplementary materials such as CDs or access codes. May show signs of minor shelf wear and contain limited notes and highlighting. Seller Inventory # 0714829145-2-4