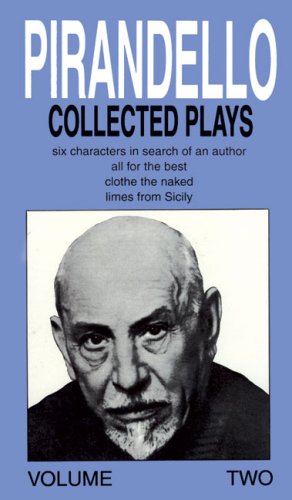 This is the second volume of a collected edition of the plays of Luigi Pirandello, one of the major playwrights of the early 20th century.Six Characters in Search of an Author is Pirandello's best known work. The reality of the theater and the unreality of life cross over as the dramatist steps in and out of the framework of stage convention. InAll for the Best the principle character discovers that his daughter is illegitimate and that he is the only one not to have known.Clothe the Naked is another study of the nature of reality and unreality in the loneliness of the principle character and the fictitious existence she creates for herself.Limes from Sicily is Pirandello's first produced play that movingly captures the nostalgia of Sicilians in exile.

Luigi Pirandello (1867-1936) was one of the major literary figures of the 20th century, writing novels, stories and plays, but it is for the latter that he is most famous. He won the Nobel Prize for literature in 1934.