Items related to For to End Yet Again and Other Fizzles

Beckett, Samuel For to End Yet Again and Other Fizzles

For to End Yet Again and Other Fizzles 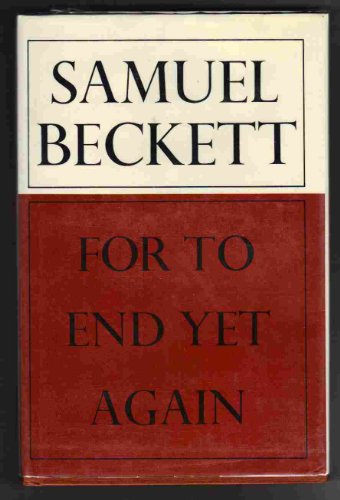 These short prose works are in many ways similar to the Texts
For Nothing, but unlike the earlier outbursts the tone is more muted and
resigned. The volume contains: For to End Yet Again, Still, He Is Barehead,
Horn Came Always, Afar a Bird, I Gave Up Before Birth, Closed Space and Old
Earth.

This is part of a series of twelve short volumes brought out
ten years after the great writer's death, containing the best of the
shorter writing, ranging from early work to his final writings. All have
covers with the photographs of Samuel Beckett taken by the Irish
photographer John Minihan, which, catching the author in different moods,
have become classics on their own.

Samuel Beckett was born in a suburb of Dublin in 1906 and died
in Paris in 1989. After school in Northern Ireland he went to Trinity
College in Dublin where he distinguished himself in French and Italian and
was recognised as a brilliant scholar, who under an exchange arrangement
taught at the Ecole Normale Supérieure before becoming a writer. He left
Ireland and finally settled in Paris, staying in France during the war
where he was a courier in the Résistance. He won the Nobel Prize in 1969
and is now recognised as one of the major writers of the 20th century.

2. For To End Yet Again and Other Fizzles

Book Description Riverrun Press, Incorporated 19. Condition: Good. Ships from the UK. Former Library book. Shows some signs of wear, and may have some markings on the inside. Seller Inventory # 6897471-6