Items related to Here Comes Everybody: The Power of Organizing Without...

Shirky, Clay Here Comes Everybody: The Power of Organizing Without Organizations

Here Comes Everybody: The Power of Organizing Without Organizations 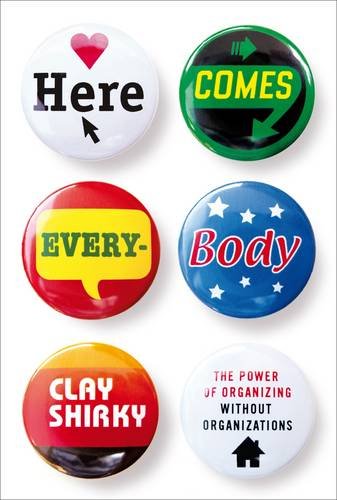 A woman loses her phone, and recruits an army of volunteers to get it back. A dissatisfied airline passenger spawns a movement with her web log. Citizens with camera-phones are more effective than photojournalists at documenting the London Transport bombings. The world's largest encyclopedia is created by unmanaged participants. A handful of kids in Belarus create a political protest the state is powerless to stop ...Everywhere you look, groups of people are coming together to share with one another, work together, or take some kind of public action. For the first time in history, we have tools that truly allow for this.In the same way the printing press amplified the individual mind and the telephone amplified two-way conversation, now a host of new tools, from instant messages and mobile phones to weblogs and wikis, amplify group communication. And because we are natively good at working in groups, this amplification of group effort will change more than business models: it will change society. What does it mean that someone with a laptop can spark a movement that changes the fortunes of a billion-dollar-industry or help topple a government? This profound and larger social impact is only now being explored. In "Here Comes Everybody" Clay Shirky, one of the new culture's wisest observers, give us his lucid and penetrating analysis on what the impact of this social revolution will be - for better or worse - on what we do, and who we are.

Clay has long been one of my favorite thinkers on all things Internet – not only is he smart and articulate, but he's one of those people who is able to crystallize the half-formed ideas that I've been trying to piece together into glittering, brilliant insights that make me think, yes, of course, that's how it all works (Cory Doctorow, co-editor of Boing Boing and author of Overclocked: Stories of the Future Present)

In story after story, Clay masterfully makes the connections as to why business, society and our lives continue to be transformed by a world of net-enabled social tools. His pattern-matching skills are second to none (Ray Ozzie, Microsoft Chief Software Architect)

The revolution will not be televised - it will be emailed, texted, blogged, wikied ...

Welcome to the new future of involvement. Forming groups is easier than it's ever been: unpaid volunteers can build an encyclopaedia together in their spare time, mistreated customers can join forces to get their revenge on airlines and high street banks, and one man with a laptop can raise an army to help recover a stolen phone.

The results of this new world of easy collaboration can be both good (young people defying an oppressive government with a guerrilla ice-cream eating protest) and bad (girls sharing advice for staying dangerously skinny) but it's here and, as Clay Shirky shows, it's affecting ... well, everybody.

For the first time, we have the tools to make group action truly a reality. And they're going to change our whole world.

'As usable as the technology he writes about' Independent

'Anyone interested in the vitality and influence of groups of human beings - from knitting circles, to political movements, to multinational corporations - needs to read this book' Steven Johnson, author of Everything Bad is Good for You and Emergence

1. Here Comes Everybody: The Power of Organizing Without Organizations