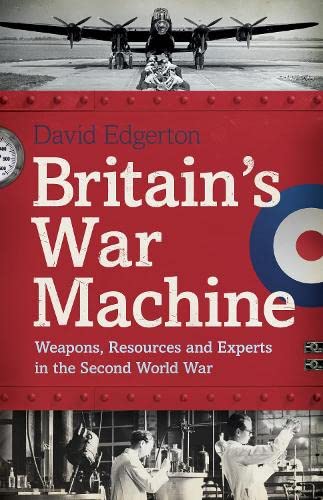 The familiar image of the British in the Second World War is that of the plucky underdog taking on German might. This title shows the conflict in a different view, with Britain as a very wealthy country, formidable in arms, ruthless in pursuit of its interests and sitting at the heart of a global production system.

Brilliant and thought-provoking ... There are moments of edgy humour, too ... This remarkable book shows that whatever the reasons for the length of time it took to bring Hitler to heel, the quantity and quality of British war material was not among them (Brendan Simms Sunday Telegraph)

Edgerton's book is a remarkable achievement. He re-envisions Britain's role in World War II and with it Britain's place in modernity. In place of a plucky island standing alone, he gives us a global empire of machines, not a welfare state, but a technocratic warfare state. The period will never look the same again (Adam Tooze, author of The Wages of Destruction: The Making and Breaking of the Nazi Economy)

Absolutely fascinating. This book will make you think differently about Britain's role in the Second World War (Laurence Rees, author of Auschwitz: The Nazis and The 'Final Solution')

For too long we have had a distorted view of Britain's position and role in the Second World War. David Edgerton has produced a stunning book that rectifies this misconception, and which is told with authority, clarity and compelling energy (James Holland, author of The Battle of Britain)

This book has certainly changed my views ... It is a necessary and timely corrective to a great deal of loosely thought-through conventional wisdom, and makes a real contribution to our understanding of the war (Richard Holmes Literary Review)

A stimulating exercise in muscular revisionism ... Offers a fresh and provocative view of our much-loved and much-misunderstood "finest hour" (David Reynolds Guardian)

Accessibly written and deserves a wide audience. Above all, Edgerton demonstrates that the war is a subject we haven't yet heard nearly enough about. Britain's War Machine is a considerable achievement (Graham Farmelo Times Higher Education)

Edgerton has excelled himself with this highly revisionist account of Britain's national performance during the Second World War ... an unusually provocative book (Twentieth Century British History, 2011)

David Edgerton is the Hans Rausing Professor at Imperial College London, where he was the founding director of the Centre for the History of Science, Technology and Medicine. He is the author of a sequence of groundbreaking books on 20th century Britain: England and the Aeroplane: An Essay on a Militant and Technological Nation, Science, Technology and the British Industrial 'Decline', 1870-1970 and Warfare State: Britain, 1920-1970. He is also the author of the iconoclastic and brilliant The Shock of the Old: Technology and Global History Since 1900