Items related to The Red Hourglass " Lives of the Predators "...

Grice, Gordon The Red Hourglass " Lives of the Predators " :

The Red Hourglass " Lives of the Predators " : 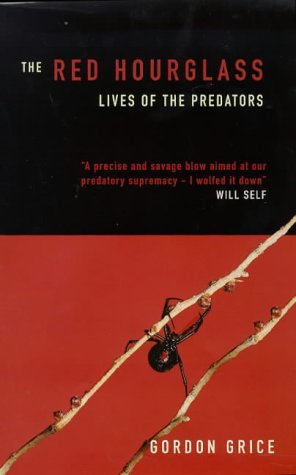 Nature's most fearsome predators are nightmarish creatures: the black widow, recognizable by the blood-red hourglass shape on its underside; the rattlesnake; the tarantula; the feral pig. With an unnerving sense of delight, Gordon Grice shows that the reality of these creatures' behaviour is in fact far worse than anything we might imagine. Grice's household is full of murderous pets; his powerful imagination obsessed by every eery and evil aspect of nature. His remarkable book is a unique combination of scientific description, tall and twisted tales, wildly funny recollections and dark philosophical reflection. 'A precise and savage blow aimed at our predatory supremacy - I wolfed it down' - Will Self

The Red Hourglass creeps and crawls with seven essays that follow the author's fascination with spiders, insects, snakes--even wild pigs. Its title, suggesting the irony of lethal beauty, provides a hint of the miraculous nature writing contained within; Grice transforms even the most horrific events of the natural world into poetry. Here's a pet praying mantis during feeding time: "The moth flapped its wings into a buzzing blur every few seconds while the mantid unhurriedly ate it, starting from the head. The pruning-shear mouth parts worked away, biting out chunks of moth and lapping the juices. The moth's scales, which had broken into particles of dust when they smeared my hand, looked like little brown feathers when they were whole, and they drifted down in a steady snow." The writing is quirky, lyrical, and intensely personal. Grice is not just an observer of nature; he gleefully participates in the strange and wonderful lives of mostly small, predatory animals, and most readers will simultaneously squirm and delight in his unusual, ground-level perspective. Then again, some readers may be reduced to quivering terror. If you suffer from a fear of the little beasts roaming the earth, perhaps Grice's exploration of the predator-prey relationship might prove too frightening and abhorrent. --Amazon.com

"Gordon Grice is one hell of a writer. I was originally disturbed by some of the killing he depicts, but his descriptions are so compelling that I had to read on. I'm glad I did."
--Jeffrey Masson, author of When Elephants Weep and Dogs Never Lie About Love

"The Red Hourglass marks the debut of a fresh, strange, and wonderful new voice in American nature writing."
--Michael Pollan, author of A Place of My Own and Second Nature From the Hardcover edition.

1. The red hourglass : lives of the predators

2. The red hourglass : lives of the predators [Hardcover] Grice, Gordon