Items related to A Bird in the Hand

Cleeves, Ann A Bird in the Hand

A Bird in the Hand 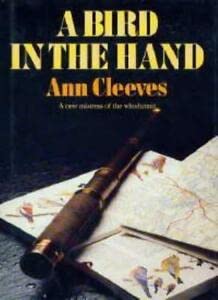 In England's birdwatching paradise, a new breed has been sighted-a murderer . . .

Young Tom French was found dead, lying in a marsh on the Norfolk coast, with his head bashed in and his binoculars still around his neck. One of the best birders in England, Tom had put the village of Rushy on the birdwatching map. Everyone liked him. Or did they?

George Palmer-Jones, an elderly birdwatcher who decided quietly to look into the brutal crime, discovered mixed feelings aplenty. Still, he remained baffled by a deed that could have been motivated by thwarted love, pure envy, or something else altogether.

But as he and his fellow "twitchers" flocked from Norfolk to Scotland to the Scilly Isles, in response to rumours of rare sightings, George-with help from his lovely wife, Molly-gradually discerned the true markings of a killer. All he had to do was prove it . . . before the murderer strikes again.

From the author of Shetland and Vera

Book Description Hardcover. Condition: Very Good. Item is in very good condition. If supplemental codes/CDs for textbooks are required please contact us prior to purchasing as they may be missing. Photos are stock pictures and not of the actual item. Seller Inventory # DS-0712694765-2