Items related to Herbert Von Karajan: A Life in Music 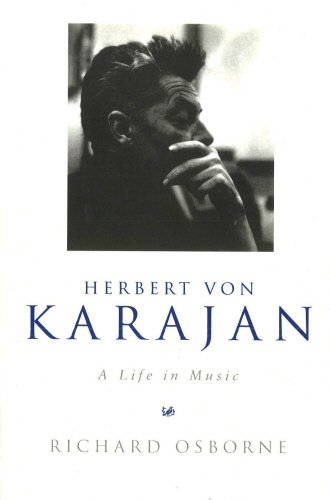 Herbert von Karajan was one of the twentieth century's most prodigiously gifted performing artists. Richard Osborne knew him and had many conversations with him. These, however, were only the starting point for a biography which draws on interviews with those who worked with Karajan during his sixty year career, and on a vast array of primary archive material which has never been previously examined.

This biography explores Karajan's life and music-making against the background of European music and politics in the years 1908 - 1989. The Austrian theatre producer Otto Schenk once said of Karajan: 'He is not only a musician. He is a whole period. When I was a boy he was already a period in our history'. This epic biography explores that period, and the enigma of the man who made it.

Von Karajan was the mastermind behind the greatest European orchestra of his age: the Berlin Philharmonic. He worked with the finest artists of his time and pioneered the huge international business of recordings. He died in 1989, 'the conductor's conductor'.

"Richard Osborne's Karajan is a monumental work of scholarship, of integrity, of sympathy born of respect and humanity. A woven tapestry, rather than a mere listing of events and accomplishments, it reveals itself quietly and objectively, leaving the readers to judge a man whose personality was inseparable from the history of his age and his own background" (Yehudi Menuhin)