Items related to The Importance of Elsewhere: Philip Larkin's Photographs 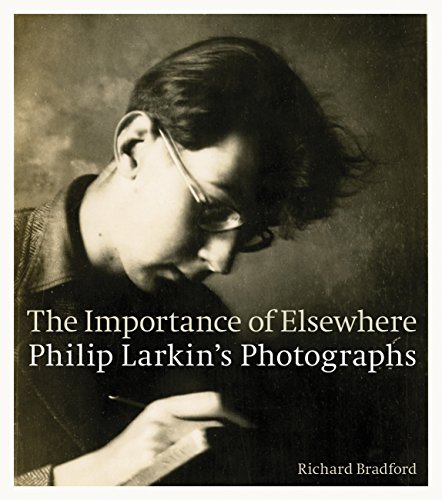 'Larkin's photographs not only illustrate his poems - they explain and deepen them ... superlative, succinct and subtle biographical commentary'. The Times

The most widely read British poet of the twentieth century, Philip Larkin was also a keen amateur photographer and through his life he made images of the people, places and things that meant most to him. The Importance of Elsewhere gathers the best of Larkin's photographic work, divided into short thematic chapters arranged in chronological order.

Written by Richard Bradford, the acclaimed author of the Larkin biography First Boredom, Then Fear, the book shows how Larkin, as an individual, as a writer and indeed as a photographer, developed an acute sensitivity to all aspects of the world around him, from his love of open uninhabited landscapes and empty churches to his mixed feelings about crowds. There are also fascinating portraits of those people who were closest to Larkin, including his lovers, his mother and his literary peers.

The book beautifully reproduces more than 200 images from the Larkin archive at Hull: the majority have never previously been seen in print. A substantial foreword by Mark Haworth-Booth, formerly curator of photography at the V&A, explores what it meant to be a serious amateur photographer of Larkin's generation.

Together with Larkin's literary works and his letters, these images make up the third, so far unseen, constituent of the material upon which our future perceptions of him will be based.

"For anyone interested in English Poetry of the twentieth century, The Importance of Elsewhere is a fascinating book. For those with a particular interest in Philip Larkin, it’s an event."


"the only revelation in this imposingly handsome book turns out to be Larkin’s talent behind the lens."

“ Larkin’ s photographs not only illustrate his poems - they explain and deepen them.” “ ...superlative, succinct and subtle biographical commentary”

"the only revelation in this imposingly handsome book turns out to be Larkin’ s talent behind the lens."

"A fascinating and tantalising book, and one that sheds light on a great poet and tricky human being, who seems to have found, in photography, another altogether less fretful – and perhaps kinder – way of preserving what he experienced."

Christmas 2015: The top 14 poetry books -  “ There may not be much undiscovered work to come from Philip Larkin, but for completists The Importance of Elsewhere: Philip Larkin's Photographs, by his biographer Richard Bradford, is indispensable.”

"For anyone interested in English Poetry of the twentieth century, The Importance of Elsewhere is a fascinating book. For those with a particular interest in Philip Larkin, it’ s an event."

'A beautifully produced book ... the photographs display the full range of his poetic sensibility, from the melancholic to the comical'

Mark Haworth-Booth served as a curator at the Victoria and Albert Museum (V&A) from 1970 - 2004 and, as senior curator of photographs, helped to build up its great collection of photography. He is now an Honorary Research Fellow at the V&A and a Senior Fellow of the Royal College of Art. He was appointed an Officer of the British Empire for services to museums in 2005 and he became an Honorary Doctor of Arts of the University of the Arts London in 2012.

'Elegantly written and cogently argued ... His book is founded on a deep respect for, and love of, his subject's curious greatness'

Richard Bradford is Research Professor in English at the University of Ulster and aside from having published a large number of academic monographs he has earned a considerable reputation as the author of literary biographies of Philip Larkin, Kingsley Amis, Alan Sillitoe and Martin Amis. His book The Odd Couple on the curious relationship between Amis and Larkin was described as 'a lively, readable and often scandalous portrait' by theSunday Times.

The Importance of Elsewhere: Philip Larkin's Photographs (Paperback or Softback)