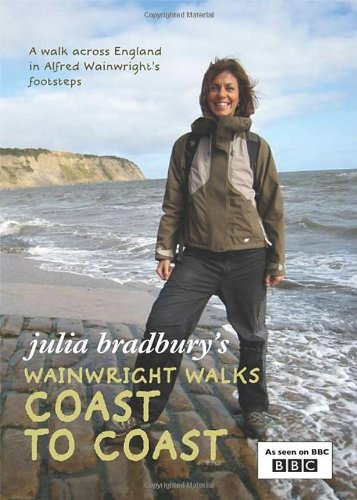 The much-loved fellwalker Alfred Wainwright created one of the truly great walking challenges – to walk across the whole of England. The Coast to Coast route was AW’ s last great venture and has become his greatest legacy to long distance walkers – a beautifully simple proposition, linking three national parks that lie between the Irish and the North Sea - The Lake District, The Yorkshire Dales and The North Yorks Moors National Parks.
Accompanying the BBC television series, this book follows Julia Bradbury as she re-traces Wainwright’ s grand traverse. The book collects together all six stages of the walk from the TV series, with Julia’ s commentary on her experience of the walk accompanied by stills, evocative landscape photography, and AW’ s celebrated line drawings. Julia crosses this changing landscape in sun, wind and rain, learns something of its history and meets the people that make up almost 200 miles of northern England’ s most glorious countryside.

'what really makes [this book] is Julia's amusing and entertaining personal commentary.'


'not only a reflective book but should give anyone thinking of completing the traverse an encouraging push to get out there.'


'a beautifully presented book with many striking colour photos'


'not only a reflective book but should give anyone thinking of completing the traverse an encouraging push to get out there.'

'light and informal narrative account of her walk should delight fans of both AW and JB.   It's lavishly presented on high quality paper and richly illustrated.'

'a beautifully presented book with many striking colour photos'

'what really makes [this book] is Julia's amusing and entertaining personal commentary.'

Julia Bradbury is one of television's most experienced and versatile presenters. She currently co-hosts the BBC1 country affairs programme Countryfile with Matt Baker. They travel to the most interesting places in the country uncovering stories, meeting people and investigating issues that affect us all. It launched to record ratings and is consistently the 'most watched programme' on BBC One. Countryfile is broadcast every Sunday at 7pm. For two weeks during the summer of 2009 Julia and fellow Countryfile presenter Matt Baker were amongst 12 celebrities racing against time to raise money for Children In Need. Around the World in 80 Days offered a visually stunning circumnavigation of Planet Earth, re-enacting the epic odysseys of Phileas Fogg and Michael Palin for a 21st Century audience. Julia personally raised over Ł 14,000.00 Following the enormous success of Wainwright's Walks and Railway Walks, Julia is in the middle of filming three more visually stunning series, set in Germany, Africa and another UK location yet to be announced. Julia is continuing her "cutting edge" series of Kill It, Cook It, Eat It for BBC Three. In her last series, Julia explored the process of getting wild game from field to fork. Nine contributors went on a journey to find out, first hand, what was involved in the shooting, butchering and preparing of wild game for their table. The controversial food programme, which has just been transmitted on BBC3 examined the nation's relationship with meat 'from farm to fork'. A well known face on our screens, Julia's back catalogue has included the consumer affairs programme Watchdog, travel series for Rough Guide and Wish You Were Here. Prior to that she was the Los Angeles Correspondent for GMTV, and hosted EXCLUSIVE!, one of the launch programmes for Five. Gareth McLean of the Guardian wrote "she is one of the best presenters on British television. Julia Bradbury manages to be authoritative and warm, funny but not fluffy. She is capable and charming but also knows some right dirty jokes and could probably drink you under the table".

Book Description Paperback. Condition: Very Good. The book has been read, but is in excellent condition. Pages are intact and not marred by notes or highlighting. The spine remains undamaged. Seller Inventory # GOR005615517

Book Description Paperback. Condition: Fair. A readable copy of the book which may include some defects such as highlighting and notes. Cover and pages may be creased and show discolouration. Seller Inventory # GOR010493527

Book Description Frances Lincoln, 2013. Paperback. Condition: Good. Ex library copy with usual stamps/stickers Good condition is defined as: a copy that has been read but remains in clean condition. All of the pages are intact and the cover is intact and the spine may show signs of wear. The book may have minor markings which are not specifically mentioned. Most items will be dispatched the same or the next working day. Seller Inventory # wbb0015914559

Book Description Frances Lincoln Publishers Ltd 2013-04-04, 2013. Paperback. Condition: Good. Item is in good condition. Some moderate creases and wear. This item may not come with CDs or additional parts including access codes for textbooks. Might be an ex-library copy and contain writing/highlighting. Photos are stock pictures and not of the actual item. Seller Inventory # DS-0711233802-3