Items related to Fraser of North Cape: Life of Admiral of the Fleet... 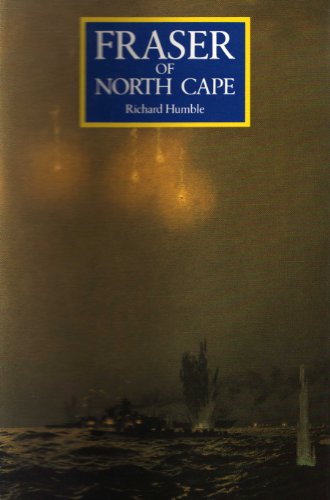 From the dust jacket. Admiral Lord Fraser was one of Britain's foremost sailors of the Second World War. He sank the German battle cruiser Scharnhorst in the Navy's last fleet action, commanded the most powerful British fleet of all time in the Pacific, and signed the surrender of Japan for Britain. Lord Fraser was much loved by his men and also had a great national following, and this authorised biography tells the story of a great and modest man. Richard Humble describes how Lord Fraser's remarkable career began in 1904, when he went to sea as a midshipman in the pre-Dreadnought Navy. In the First World War he served at Akaba and Gallipoli and in the Grand Fleet under Beatty; in 1920, attempting a secret mission to aid the White Russians in the Caspian, he spent seven grueling months jailed in Baku as a prisoner of the Bolsheviks. In the 1930's, as Director of Naval Ordnance, his expertise in naval gunnery produced the novel quadruple turret main armament for the last generation of British battleships, the 'King George V' class. As Controller of the Navy from 1939 to 1942 he was a leading architect of victory in the war at sea, masterminding the building programme to produce the ships which won the Battle of the Atlantic. As the author explains, all these achievements make Fraser the only British admiral to devise a new weapons system, supervise its production, and win a major sea battle with it. Admiral Sir Henry Leach writes in the Forward: 'Richard Humble has written a very shrewd biography of a remarkable person. Among all the history and anecdotes of a crowded and inspiring career he has rightly allowed a single theme to transcend all others: Bruce Fraser the man.'