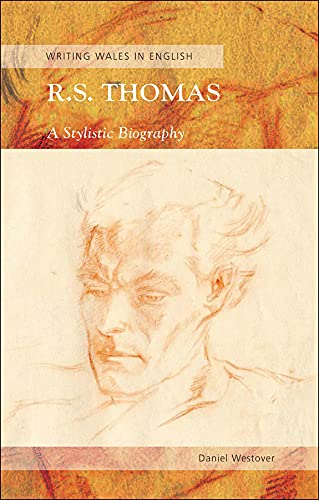 R. S. Thomas (1913-2000) is the most recognizable literary figure in Wales. His controversial politics and public personality made him a cultural icon and have led to debates about his importance. Yet these debates have too-often marginalized the poetry itself and have produced a deficient understanding of his work. This book argues that Thomas's reputation must be grounded in poetry, not personality. Accordingly, the author traces Thomas's poetic development over six decades, demonstrating how the complex interior of the poet manifests itself in the continually shifting style of his poems.

This is a landmark in R.S.Thomas studies. Too often, the work of the great priest-poet of Wales has been interpreted according to competing ideologies, with his poetry appropriated by the politicised and co-opted by the committed. Daniel Westover's impressive study clears away the critical accretions of the R.S.Thomas industry and recalls us to attend to the sheer intense craft of this most resourceful poet. He reminds us that Thomas, though apparently a reclusive traditionalist in his life and thought, was nonetheless constantly progressive and experimental in his literary techniques. As we approach the centenary of Thomas's birth, this book lets us see the poet afresh according to the only standard by which his work will ultimately live - his artistry. --Dr Grahame Davies, Honorary Fellow, Cardiff University

Westover defends his new stylistic biography by reminding us of the weight of bias that has been invested in previous appraisals of the most recognizable literary figure in Wales . Westover, frustrated by these assumptive texts, has sought to honour the ogre of Wales with a more holistic approach. He follows the chronology of Thomas s poetic development, panning for influences and contexts as he goes and, crucially, resisting the urge to romanticise. Westover gives us a humbling vision of a man discontented with the limits of his voice ; somebody constantly evolving. It s an excellent volume that takes us from these nebulous beginnings to the solidifying of Thomas s political consciousness and his desperation to waken Wales to put aside her servility . Westover gives the man himself the same treatment and the resulting work is edifying, and satisfyingly heartfelt. --Jemma King, www.gwales.com

Westover's thesis is that Thomas was a conscious and painstaking stylist and that 'Without a prosody that demands attention, the poems would not affect the reader as they do'...his book is intended to fill a neglected gap, 'the intricacies of his craft'. I think it succeeds; at least I am persuaded he was a far more conscious prosodist than I and others had given him credit for. --Sam Adams, PN Review
It is, for me, a very strange experience to read what Daniel Westover has written. These discussions about form, style, prosody and poetics swam around the house as part of normal daily conversation, and the cadences of household discourse were irretrievably mixed up with the phraseology and 'content' of the poems. Daniel has managed to capture this in his excellent Stylistic Biography. Somehow, he has managed to articulate the discourse and register of the conversations of my early life. --Gwydion Thomas

I found Daniel Westover s book hard to put down. Critical writing of this quality is a rare pleasure, all the more so when one thinks one knows the subject reasonably well, but finds oneself constantly enlightened. Westover takes our understanding to a new level by discussing the poet s prosody, as no one else has; our understanding of the man, too, is enhanced by the relationship Westover reveals between prosody and place. With M. Wynn Thomas's work on R. S. Thomas, and Tony Brown's book, this is quite the best there is on Thomas. --Jeremy Hooker

Daniel Westover is an award-winning poet and literary critic specializing in the English language poetry of Wales. He is currently Assistant Professor of Modern British Literature at East Tennessee State University.