Items related to Beef And Liberty: Roast Beef, John Bull and the English... 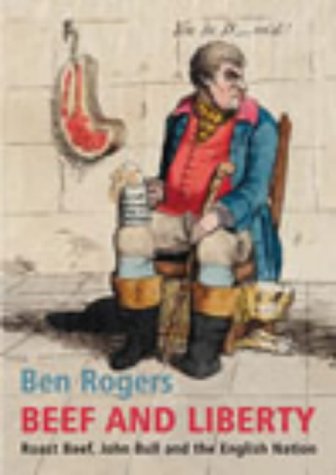 In Shakespeare's Henry V the French lords quail at the thought of British soldiers, who eat like wolves and fight like devils after 'great meals of beef'. Two centuries later, eighteenth-century England rings to boisterous renderings of 'The Roast Beef of Old England' and loud cries of 'Beef and Liberty'. And even today, in the Telegraph in June 2002, a farmer blames the French defeat in the World Cup on their ban on British beef. Eating meat rich with blood recalls ancient beliefs that it endows power, life and passion. It is a manly food, fit for fighting men: in the Napoleonic wars the British navy gave its sailors a staggering 208 pounds of beef a year. But why are so many beefy images linked to British 'freedom'. In this sparkling, provocative book Ben Rogers follows a linked set of icons - roast beef and John Bull, bull dogs and butchers -showing how the bull came to define plain, stubborn, Protestant Englishness against corrupt, effeminate, Catholic Europe. His tale is rich in vivid historical detail; from the use of the roasting jack and the outcries against French fricassees to the famous 'Durham Ox' which toured Britain in 1802, and the Sublime Society of Beefsteaks (exclusively male), which still meets in London today. Lively, funny and illuminating, illustrated throughout with prints and drawings, including famous works by Hogarth and Gillray, Beef and Liberty is a feast to relish, an entirely original history, and a pioneering study in a new subject - food nationalism.

"In and age of confusion over what it is to be a rosbif, this is a work well worth a butcher's" (The Times)

"It never ceases to entertain, and is required reading for lovers of beef-[it] will surely be the standard work" (Daily Telegraph)

Book Description Chatto and Windus, 2003. Hardcover. Condition: Used; Acceptable. Dust jacket is damaged. Ex-library. Corner of the book is damaged **Simply Brit** Shipped with Premium postal service within 24 hours from the UK with impressive delivery time. We have dispatched from our book depository; items of good condition to over ten million satisfied customers worldwide. We are committed to providing you with reliable and efficient service at all times. Seller Inventory # 2882622

Book Description Chatto & Windus, 2003. Hardcover. Condition: Good. Ex Library Book with usual stamps and stickers. Good condition is defined as: a copy that has been read but remains in clean condition. All of the pages are intact and the cover is intact and the spine may show signs of wear. The book may have minor markings which are not specifically mentioned. Most items will be dispatched the same or the next working day. Seller Inventory # mon0012016657

Book Description Hardback. Condition: Very Good. The book has been read, but is in excellent condition. Pages are intact and not marred by notes or highlighting. The spine remains undamaged. Seller Inventory # GOR004117107

Book Description Hardback. Condition: Good. The book has been read but remains in clean condition. All pages are intact and the cover is intact. Some minor wear to the spine. Seller Inventory # GOR002648174