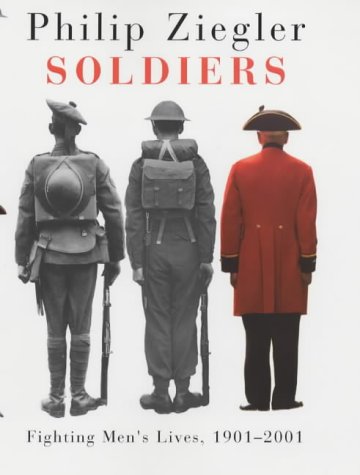 An in-depth study of the character and spirit of soldiers. This book takes as its starting point interviews with Chelsea Pensioners whose lives in the army span the 20th century, and who have seen action from World War I to Korea. Author Philip Ziegler is fascinated by the value that war veterans share, which the army must have inculcated in them: self-discipline, acceptance of risk and pain, patriotism, and solidarity with their fellow soldiers. Of course there is sometimes bigotry, narrow-mindedness and even blinkered stupidity. Ziegler also addresses the question of whether army values are still admired in modern British society. Above all though, this book celebrates the lives and attitudes of soldiers and comes to an understanding of the ethos that means so much to them.

Philip Ziegler's Soldiers is based on the fact that in 1682 King Charles II founded a home for retired soldiers in Chelsea, London. It was named the Royal Hospital and built by Sir Christopher Wren. England being the sort of country it is, the hospital is still there, much as it was three centuries ago, right down to the resplendent scarlet coats and tricorn hats that the old soldiers wear for ceremonial occasions. And a fascinating bunch they are, possessing more military knowledge than Sandhurst and Westpoint combined; and it is hands-on knowledge too, not mere theory. Ziegler, one of Britain's foremost historians, whose past triumphs include classics of popular history such as The Black Death and London at War, has chosen his subjects with care and brought out the most fascinating life stories. The veteran among veterans here is Albert Alexandre, born in 1901 and still going strong. At 15 years and 11 months he joined up and no questions were asked. Four months later he was fighting in the trenches of Passchendaele. Alexandre was one of those rarities who fought in both world wars, stationed out in India for the sequel. At 97 he was still doing press-ups, and the exercise bicycle at 99. There is Thomas Parnell, born 1918, who fought in North Africa and all the way through Italy. At El Alamein, he remembers 48 hours of continuous shell-fire, followed by a brief lull when his tank driver hopped out to make a cup of tea, only to see it, and two of his fingers, blown away by stray shrapnel. "First bloody cup of char in two days and the bastards take it off me!" The loss of two fingers didn't matter much, but the loss of a nice cup of tea was unforgivable. Many of the great battles are here--Dunkirk, El Alamein, the Burma Campaign--remembered as individual scenes of heroism and horror. Generally the old soldiers are reticent about dwelling on the horrors, but the poignancy of some of their stories is all the more powerful for such reticence. One recalls a comrade-in-arms being hit by a sniper. "He spoke two words, sat down and died." He remembers thinking simply, "God, how easy it is to die". Quietly Ziegler lets the soldiers' own voices resonate, with dry wit, sprightliness, clarity, regret for lost comrades and a complete absence of self-pity or self-regard for the hard, heroic lives they have lived. --Christopher Hart

"Intensely moving, humbling, heartening - this is a handsome book" (The Times)

"The great virtue of this book is that with Ziegler's help, nice remarkable men who might otherwise have remained unchronicled, have written their dispatch and each has a gripping tale to tell" (Evening Standard)