Items related to The Mushroom at the End of the World: On the Possibility...

Tsing, Anna Lowenhaupt The Mushroom at the End of the World: On the Possibility of Life in Capitalist Ruins

The Mushroom at the End of the World: On the Possibility of Life in Capitalist Ruins 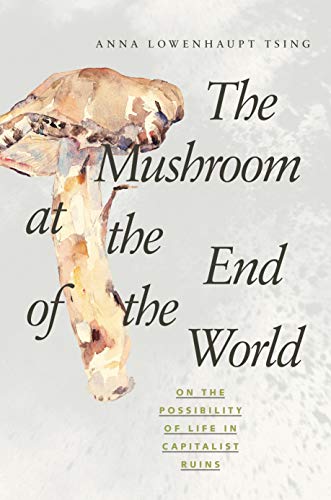 Matsutake is the most valuable mushroom in the world--and a weed that grows in human-disturbed forests across the northern hemisphere. Through its ability to nurture trees, matsutake helps forests to grow in daunting places. It is also an edible delicacy in Japan, where it sometimes commands astronomical prices. In all its contradictions, matsutake offers insights into areas far beyond just mushrooms and addresses a crucial question: what manages to live in the ruins we have made? A tale of diversity within our damaged landscapes, The Mushroom at the End of the World follows one of the strangest commodity chains of our times to explore the unexpected corners of capitalism. Here, we witness the varied and peculiar worlds of matsutake commerce: the worlds of Japanese gourmets, capitalist traders, Hmong jungle fighters, industrial forests, Yi Chinese goat herders, Finnish nature guides, and more. These companions also lead us into fungal ecologies and forest histories to better understand the promise of cohabitation in a time of massive human destruction. By investigating one of the world's most sought-after fungi, The Mushroom at the End of the World presents an original examination into the relation between capitalist destruction and collaborative survival within multispecies landscapes, the prerequisite for continuing life on earth.

Winner of the 2016 Victor Turner Prize in Ethnographic Writing, Society for Humanistic Anthropology

One of Flavorwire's 10 Best Books by Academic Publishers in 2015

One of Times Higher Education's Best Books of 2015

The Mushroom at the End of the Worldevolves into a well-researched and thought-provoking meditation on capitalism, resilience, and survival.---E. Ce Miller, Bustle.com

This was a year of many of books about the Anthropocene--the name now frequently invoked to describe an era of incalculable human impact on geological and ecological conditions. Few of these books are as focused and useful as Tsing's, which follows the supply chain of the Matsutake, the most valuable mushroom in the world, through 'Japanese gourmets, capitalist traders, Hmong jungle fighters, industrial forests, Yi Chinese goat herders, Finnish nature guides, and more.' How else to negotiate the conditions--if there are any--for our survival?---Jonathan Sturgeon, Flavorwire

A fascinating account of the biology, ecology, genetics and anthropology of the world's most valued mushroom.---Louise O. Fresco, Times Higher Education

The anthropologist Anna Tsing joins a range of scholars exploring the ongoing devastation of our environment and undoing the old binary of 'nature' and 'society'--in this case, taking the charismatic Matsutake mushroom as her protagonist, tracing its existence within ecosystems, markets, and cultures across the globe. I'm interested in this rather remarkable book, both in its empathetic meditations on 'companion species' and in its experimental mode of history writing.---James Graham, Metropolis

[Tsing] writes clearheaded prose with an ear for lyrical phrases. . . . [The Mushroom at the End of the World] is a wonderful meditation on how humans shape and distort the natural landscape, and in return, are shaped and distorted by a wildness of their own making.---Casey Sanchez, Santa Fe New Mexican

"Scientists and artists know that the way to handle an immense topic is often through close attention to a small aspect of it, revealing the whole through the part. In the shape of a finch's beak we can see all of evolution. So through close, indeed loving, attention to a certain fascinating mushroom, the matsutake, Anna Lowenhaupt Tsing discusses how the whole immense crisis of ecology came about and why it continues. Critical of simplistic reductionism, she offers clear analysis, and in place of panicked reaction considers possibilities of rational, humane, resourceful behavior. In a situation where urgency and enormity can overwhelm the mind, she gives us a real way to think about it. I'm very grateful to have this book as a guide through the coming years."--Ursula K. Le Guin

"If we must survive in the 'ruins of capitalism'--what some call the Anthropocene--we need an example of how totally unexpected connections can be made between the economy, culture, biology, and survival strategies. In this book, Anna Lowenhaupt Tsing offers a marvelous example with the unlikely case of a globalized mushroom."--Bruno Latour, author of An Inquiry into Modes of Existence

"This is a thoughtful, insightful, and nuanced exploration of the relationships between people and landscapes, landscapes and mushrooms, mushrooms and people. Anthropologists, historians, ecologists, and mushroom lovers alike will appreciate the depth and sensitivity with which Anna Lowenhaupt Tsing follows this modern global commodity chain, from the forests of North America and China to the auction markets of Japan."--David Arora, author of Mushrooms Demystified

"It isn't often that one discovers a book that is at once scholarly in the best sense and written with the flowing prose of a well-crafted novel. Speaking to issues of major concern, The Mushroom at the End of the Worldis a brilliant work, superbly conceived, and a delight to read."--Marilyn Strathern, emeritus professor of social anthropology, University of Cambridge

"This book uses the matsutake mushroom as a lens through which to examine contemporary environmental history, global commodity production, and science. With soaring prose, penetrating intellect, and sustained creativity and originality, it links disparate topics in new and profound ways. Spanning an astonishing number of fields, this work is destined to be a classic."--Michael R. Dove, Yale University

1. The Mushroom at the End of the World: On the Possibility of Life in Capitalist Ruins

Book Description Hardcover. Condition: Used; Good. **SHIPPED FROM UK** We believe you will be completely satisfied with our quick and reliable service. All orders are dispatched as swiftly as possible! Buy with confidence!. Seller Inventory # 4104065

2. The Mushroom at the End of the World: On the Possibility of Life in Capitalist Ruins

Book Description Hardcover. Condition: Good. Usually ships within 24 hours in quality packaging. Satisfaction guaranteed. Books have varying amounts of wear and highlighting. Please note that items may contain writing and/or highlighting and may not include CDs, access cards, or other supplementary material. We are not able to ship internationally. Your satisfaction is guaranteed! Items ship in quality packaging within 3 business days. Seller Inventory # 8800035003876

3. The Mushroom at the End of the World: On the Possibility of Life in Capitalist Ruins

4. The Mushroom at the End of the World: On the Possibility of Life in Capitalist Ruins

Book Description Condition: Fair. Independent family-run bookstore for over 50 years! Buy with confidence! Book is in acceptable condition with wear to the pages, binding, and some marks within. Seller Inventory # bk0691162751xvz189zvxacp