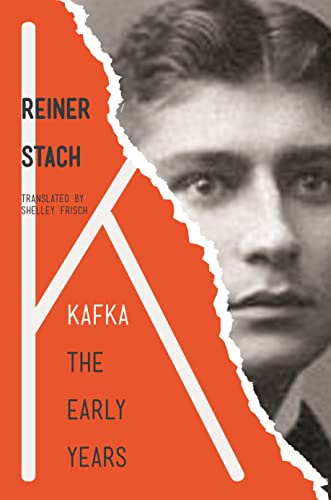 "One of CHOICE's Outstanding Academic Titles for 2017"

"[An] immensely rewarding journey. This volume completes one of the great literary biographies of our time--indeed, any time. . . . So delightful, so magical, are the closing couple of pages that one longs to paraphrase them, but that would be to spoil the perfect balance the biographer achieves between comedy, wistfulness, and faint absurdity, qualities that are as much a mark of Kafka's writing as its darkness and its terror. There could not have been a better close to this marvelous account of the life of a supremely great artist."---John Banville, New York Review of Books

"Stach often does quietly brilliant work connecting known details of Kafka's youth to the older Kafka, so the reader can see how events appear (or don't) in the specific subjectivity of Kafka's recollection."---Rivka Galchen, London Review of Books

"Stach's book crowns a definitive biographical trilogy 18 years in the making. . . . Kafka: The Early Years, along with its two siblings--all three volumes impeccably translated from the German by Shelley Frisch--often feels like biography plotted as a novel. Stach's relish for detail is marshaled to the sensibility--if not the omniscience or imaginative license--of the novelist. . . . [T]he heft of Stach's research is balanced by interpretive tact and a discerning eye."---Benjamin Balint, Wall Street Journal

"Praise for the previous volumes: "This is one of the great literary biographies, to be set up there with, or perhaps placed on an even higher shelf than, Richard Ellmann's James Joyce, George Painter's Marcel Proust, and Leon Edel's Henry James. . . . [A]n eerily immediate portrait of one of literature's most enduring and enigmatic masters.""---John Banville, New York Review of Books

"Praise for Reiner Stach's biography of Kafka, winner of the 2015 Bavarian Book Prize: "One discovers a new, a different Dr. Franz Kafka of Prague in Reiner Stach's monumental, three-volume biography, which concludes triumphantly with Kafka: The Early Years Kafka--a techie, a lady-killer, friend, the inventor of 3-D movies, and the prospective author of a series of low-priced travel guides for Europe. Reiner Stach proves that biography can be a literary art form and gives definitive shape to our contemporary image of Kafka.""---Bavarian Book Prize jury statement,

"Praise for the previous volumes: "[This] will surely be the definitive biography of one of the 20th century's most mysterious artists. Stach's declared aim is to find out what it felt like to be Kafka, and he succeeds.""---John Banville, Irish Times