Items related to History of the Twentieth Century

History of the Twentieth Century 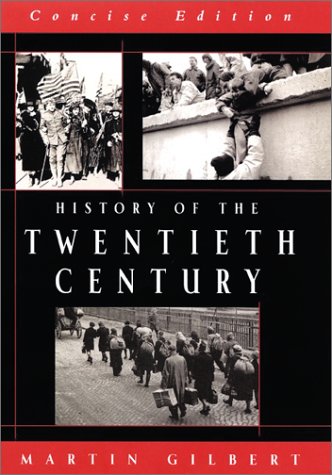 A concise editon of the critically acclaimed three-volume history of the twentieth century ranges from 1900 to 1999, chronicling the events, wars, disasters, cultural developments, religious and social movements, technological innovations, scientific advances, and personalities that shaped the century. 25,000 first printing.

‘In his great work, the writing is lucid, the pace perfectly judged, the evidence vividly conjured. The horrors are heightened by a style of almost Confucian reticence, which teaches without didacticism. In Gilbert's vision of history, the vast range never blurs the human scale. He is inspired by a victim of the Japanese brutalisation of Canton in 1937: "Historians may appropriate only a line or two to record this present catastrophe, but it is tremendous to those of us that are in it."' FELIPE FERNÀNDEZ-ARMESTO, Sunday Times

Martin Gilbert is Britain's leading popular historian. His 'History of the Twentieth Century' is a complete global narrative history of our century. The undisputed master of narrative history, he has an extraordinary ability to muster detailed facts into rich and compelling prose. He retells the events of this, the most horrifying and surprising century that the world has ever experienced, and makes sense of them in a global (and personal) context.

This single-volume history takes us up to the present day, weaving a rich historical narrative of the multifarious and contradictory events of the last century , which ranges across the bloody events of many wars (from Korea to Bosnia), the post-war resurrection of Europe and the United Nations, the Arms Race, the shooting of JFK, the advent of computerisation, Man's arrival on the moon, Aids and heart transplants, Tiananmen Square and the fall of the Berlin Wall. This is history which makes sense of the most destructive yet most creative century humanity has ever experienced.

'A mammoth undertaking, a miracle of dense compression, demonstrating a sense of proportion sustained with extraordinary self-discipline and a capacity to absorb, digest and shape a mountain of miscellaneous material... A salient and invaluable reference book, austerely non-judgmental, lucid and measured.'
PHILIP ZIEGLER, 'Daily Telegraph'.

Book Description William Morrow, 2001. Hardcover. Condition: New. 100% buyer satisfaction guarantee. *Some of our items are sealed to protect them during shipping and to maintain their listed condition* International orders over 2lbs may be subject to shipping price adjustments. Seller Inventory # mon0000089096