Items related to All the President's Men (Simon & Schuster Classics) 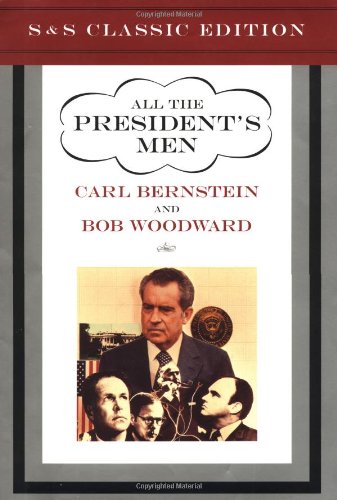 A collection of bestselling and award-winning books from our first seventy-five years. These titles are handsomely redesigned to combine original artwork with contemporary packaging. Many editions feature new Introductions by the authors.

"The New Republic" Much more than a 'hot book.' It is splendid reading...of enormous value....A very human story.

Bob Woodward and Carl Bernstein's Watergate coverage won the Washington Post a Pulitzer Prize in 1973. In 1974 they published All the President's Men, the story of how they exposed the scandal. This number one bestseller was followed by another, The Final Days, in 1976.

Carl Bernstein went on to write Loyalties: A Son's Memoir (1989) and to coauthor His Holiness: John Paul II and the Hidden History of Our Time with Marco Politi (1996). His articles have appeared in the New Republic, Rolling Stone, the New York Times, Newsweek, and Time, among other publications. He is also a consultant to CBS News. Since 1996 he has been a contributing editor at Vanity Fair. Bernstein lives in New York City.