Items related to The Subtle Knife: His Dark Materials: 02 (His Dark... 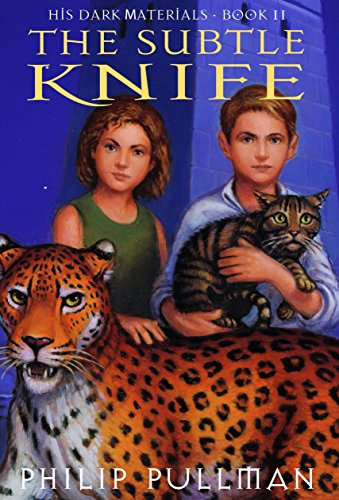 THE STUNNING SEQUEL TO THE GOLDEN COMPASS
Having slipped through a newly formed astral portal, the intrepid Lyra finds herself in the beautiful, haunted world of Città gazze--a city where soul-eating Specters stalk the streets and the wingbeats of distant angels sound against the sky. But she is not without allies. For young Will Parry, in search of his father, has also stumbled into this strange new realm via a magic gateway.
Together the enlightened pair forge ahead on a perilous journey between worlds teeming with witches, angels, and sorcery--and uncover a deadly secret: an object of extraordinary and devastating power. But with every step, they move closer to an even greater threat--and the shattering truth of their own destiny . . .

"More than fulfilling the promise of The Golden Compass, this second volume starts off at a heart-thumping pace and never slows down....The grandly exuberant storytelling is sure to enthrall."--Publishers Weekly (starred review)

"The intricacy of the plot is staggering...There is no doubt that the work is stunningly ambitious, original, and fascinating."--The Horn Book (starred review) "The character development as well as the relentless pace...make this a resoundingly successful sequel...it will leave readers desperate for the next installment."--Booklist (starred review)

Book Description Hardback. Condition: New. American. Language: English. Brand new Book. HIS DARK MATERIALS IS NOW AN HBO ORIGINAL SERIES STARRING DAFNE KEEN, RUTH WILSON, JAMES McAVOY, AND LIN-MANUEL MIRANDA!The spellbinding sequel to The Golden Compass, the modern fantasy classic that Entertainment Weekly named an All-Time Greatest Novel and Newsweek hailed as a Top 100 Book of All Time, continues the epic adventure, catapulting readers between worlds, and toward a devastating discovery. Lost in a new world, Lyra finds Will--a boy on the run, a murderer--a worthy and welcome ally. For this is a world where soul-eating Specters stalk the streets and witches share the skies with troops of angels. Each is searching--Lyra for the meaning of Dark Matter, Will for his missing father--but what they find instead is a deadly secret, a knife of untold power. And neither Lyra nor Will suspects how tightly their lives, their loves, their destinies are bound together.until they are split apart.A #1 New York Times BestsellerPublished in 40 Countries "Just as quick-moving and unputdownable as The Golden Compass. . . . The mysteries deepen and the wonders grow even more extravagant." --The Washington Post "Pullman's imagination soars . . . A literary rollercoaster ride you won't want to miss."--The Boston Globe "The story gallops with ferocious momentum . . . Devilishly inventive." --The New York Times Book ReviewDon't miss Philip Pullman's epic new trilogy set in the world of His Dark Materials!** THE BOOK OF DUST **La Belle SauvageThe Secret Commonwealth. Seller Inventory # AAS9780679879251