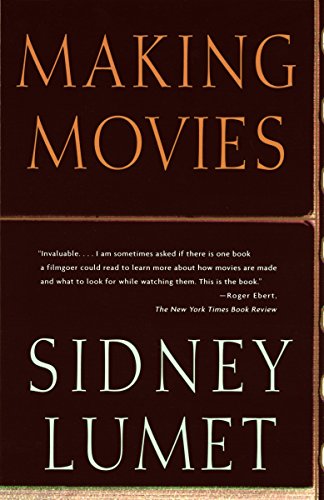 The award-winning director journeys inside the world of film to illuminate the arduous process of creating movies, discussing the art and craft of directing, writers and actors, the camera, art direction, editing, sound tracks, distribution and marketing, and the studio role. Reprint. 35,000 first printing. NYT.

"Film would be a better place if every director were required to share with other romancers of film his process. It is a gift to us all that it is Sidney Lumet, one of American's greatest filmmakers, who is sharing his point-of-view." --Stephen Spielberg

"Invaluable. . . . I am sometimes asked if there is one book a filmgoer could read to learn more about how movies are made and what to look for while watching them. This is the book." --Roger Ebert, The New York Times Book Review

"Remarkable . . . . as dignified as the movies [Lumet] has made and yet deeply felt and very moving. . . . Anyone who truly loves movies ought to read what he has to say about them. . . . Delightfully engrossing." --Los Angeles Times "The film bible from a master. It tells in meticulous detail the step-by-step process of making a movie. You feel you're on the set. A must." --Quincy Jones "Full of energy, enthusiasm and wisdom. . . . It's all engrossing because [Lumet] speaks so fervently and opinionatedly about matters on which he has earned the right to opinions." --The New Republic About the Author:

Sidney Lumet's films have received more than fifty Academy Award nominations. He has been nominated by the Directors Guild of America for Best Director seven times. In addition, he has received an honorary lifetime membership in the Directors Guild of America as well as its most prestigious award, the D. W. Griffith Award. In 1993, he received the Lifetime Achievement Award from the National Arts Club. His films have been shown in retrospectives at the Museum of Modern Art in New York, the American Museum of the Moving Image, the British Academy in London, and the Cinémathčque in Paris. He has also been honored by the French government as a Commander of Arts and Letters. He died in 2011.

Book Description Random House USA Inc, United States, 1996. Paperback. Condition: New. Reprint. Language: English. Brand new Book. Why does a director choose a particular script? What must they do in order to keep actors fresh and truthful through take after take of a single scene? How do you stage a shootout--involving more than one hundred extras and three colliding taxis--in the heart of New York's diamond district? What does it take to keep the studio honchos happy? From the first rehearsal to the final screening, Making Movies is a master's take, delivered with clarity, candor, and a wealth of anecdote. For in this book, Sidney Lumet, one of our most consistently acclaimed directors, gives us both a professional memoir and a definitive guide to the art, craft, and business of the motion picture. Drawing on forty years of experience on movies that range from Long Day's Journey into Night to Network and The Verdict--and with such stars as Katharine Hepburn, Paul Newman, Marlon Brando, and Al Pacino--Lumet explains how painstaking labor and inspired split-second decisions can result in two hours of screen magic. Seller Inventory # ABZ9780679756606